Case #5: A Russian Case (s1)
Dimitri Balanchine (Rus: Дми́трий Баланчин) was a suspect in the murder investigation of Russian mafia head Anton Levin in A Russian Case (Case #5 of Grimsborough).

Dimitri is a 37-year-old former mafia henchman and manager of Levin's Restaurant. He has blue eyes and gray hair. He wears a white suit with a gray tie. He also has scratches on the left side of his chin. It is known that Dimitri uses hand sanitizer and speaks Russian.

Dimitri was suspected of killing Anton when it was revealed he wanted to take over Levin's business and with him dead, it would have been a great opportunity. Jones and the player later learned Dimitri was dealing with Tony Marconi, Anton's rival. Anton discovered it and also took a photo of him and Marconi, but it was useless as he was murdered by that time. It was discovered later on in the investigation that Anton's son, Mikhail Levin, had killed him.

In the Additional Investigation of the very case, the team investigated Levin's restaurant because since Dimitri was in charge of it, there had been many complaints against him for food poisoning. The team took a sample of the food residues found on a plate, but they could not find anything useful. 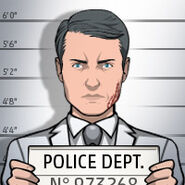 Retrieved from "https://criminalcasegame.fandom.com/wiki/Dimitri_Balanchine?oldid=544214"
Community content is available under CC-BY-SA unless otherwise noted.