Dermot is the 45-year-old now-former landlord of Paddy Whack's. He has graying red hair, a mustache, and a beard. He has tattoos of flowers above his shirt's collar and on his left arm. He wears a white, open-collared shirt with a club pattern with rolled-up sleeves under a dark green vest with a stain on the left side. He also has a dirty brown bar towel draped over his right shoulder.

In his first appearance, it is known that Dermot knows how to fight, uses hair powder and drinks Connemara whiskey.

In his second appearance, it is discovered that he has been to prison.

In his third appearance, he dons a hospital gown and sports many bruises. It is revealed that he eats Stucco Wafers, goes to dog races and has fleas.

Maddie suggested they begin their search for Mad Dog at Paddy Whack's, since she's a regular there and on friendly terms with Dermot, who owned the pub. When they got there, Dermot informed them a dead body turned up on the street behind his pub not long ago. After they found him, Dermot identified the victim as Barnaby Wilson, a local doctor, meaning Maddie and the player had to flag him as a suspect. He was not sure who would want to kill Barnaby, since he never heard anything bad about him. And he was not sure if the Irish gang was capable, as he mostly kept to himself. Dermot then offered the player to investigate his pub for more clues about the murder, and Maddie and the player took him up on his offer.

Dermot was spoken to again about a warning note from the victim about the fight club that was taking place under his pub, and the victim threatened to tell the authorities about it. He said he simply rented the place out, and what went on down there was not any of his business. Even though the victim had threatened him over it, Dermot said he was just going to have a civilized talk about it, nothing more. When suggested he killed Barnaby to silence him on behalf of the gang, he said he was a gentle soul and would never join a gang.

Dermot was found to be innocent after the team incarcerated Kev O'Connell for Barnaby's murder, but was spoken to again by the player and Rose about a dead pool taking place in the fight club underneath his pub. He still denied any involvement with the fight club and the dead pool going on too, so Rose and the player decided to search the pub to see if Dermot was making any profit off of the dead pool. They eventually found a bag of money, with a note telling Dermot it was his cut of the deal pool. With all that, they had enough evidence to arrest Dermot, and he confessed that Mad Dog said nothing would happen to him. He was not necessarily a part of the gang, he was just promised protection if he hosted their fight club underneath his pub.

Dermot became a suspect again after the player and Maddie found his cap in the slaughterhouse. Revealing that he was out of prison on good behavior, Dermot promised that he wouldn't get up to any trouble. He was then asked about the victim, whom he recognized as a customer at his old pub. After being questioned about his presence in the slaughterhouse, he said that he was buying meat for his girlfriend.

Dermot was spoken to again about his emblem on the victim's car key. He revealed that he had given the car to Thomas for safekeeping when he was sent to prison, but when he was released, Thomas refused to return the car. He then asked if he could have his car back, to which Maddie responded in shock.

Dermot was found innocent when the team incarcerated Margherita Morello for Thomas's murder. But he was spoken to again about his name being mentioned in a recording discussing the new Irish gang leader. Dermot denied any involvement with the gang and claimed to not know why his name was mentioned, before telling the team not to listen to gossip about him.

Dermot became a suspect again after the player and Maddie found his leprechaun statue and his belongings at the hospital the victim was administered. He explained he was in the hospital due being collateral damage in the gang wars, despite just being a bystander. When informed of Bridget's murder, he was shocked to hear, saying he saw her yesterday, but could not speak to her.

Dermot was spoken to again about a message he sent to the victim, telling her to choose her side. He confessed to being a member of the Irish gang, saying he had no choice but to fight for his own kind, whether he wanted to or not. As for Bridget, he wanted to tell her that too, and this was a life or death situation. But claimed he was not responsible for killing Bridget when he was accused.

Dermot was found innocent once again after the team incarcerated Timmy Tanner for Bridget's murder. But the player and Judge Lawson later arrested him again about allegations made by Jemima Hatchett that he was running an illegal gambling ring, seeing that they found proof of his involvement. 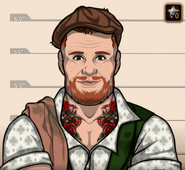 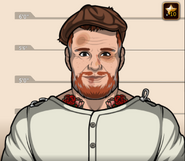 Dermot, as he appeared in Burning Bridges (Case #35 of Mysteries of the Past). 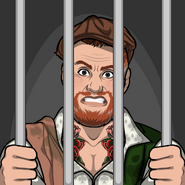 Dermot, arrested for hosting the fight club under his pub, but was later released. 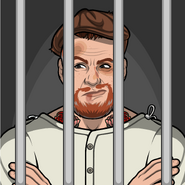 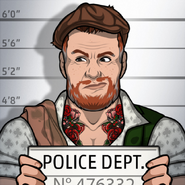 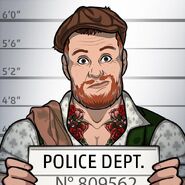 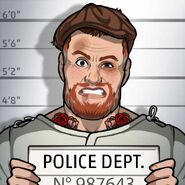 Retrieved from "https://criminalcasegame.fandom.com/wiki/Dermot_McMurphy?oldid=430254"
Community content is available under CC-BY-SA unless otherwise noted.