Derek is a 28-year-old now-former party hustler with a light stubble and long brown hair styled into cornrows. He wears an unbuttoned sea blue Hawaiian shirt and two glow sticks, one of which is light green and the other pink. Besides that, he wears a diamond earring on his left ear and sports a massive bruise on his right cheek.

In his first appearance, it is known that Derek knows car mechanics and smokes weed.

In his second appearance, he sports a burn mark on his left frontal neck. It is discovered that he listens to electronic music, uses a GPS device and drinks cocktails.

In his third appearance, Derek wears an anti-pollution mask around his neck and has a grease stain on the left side of his shirt. He also ditches his glow sticks. It is revealed that he eats canned meat and takes energy pills.

Derek was called into the investigation the first time when Frank and the player found a GPS in the crime scene, with the player's deciphering skills revealing Derek's address. Upon arrival at Derek's flat, he was told to remain in the scene as Frank and the player investigated the premise for clues. Afterwards, Frank and the player questioned Derek about the murder involving a car crash but Derek wanted to know as to why a GPS device had something on him. Frank demanded answers because Derek hosted a party the night before Carlos's death, but Derek refused to give out answers. In spite of Derek's refusal to cooperate, the team found plenty of clues to incriminate the killer.

Derek would be interrogated a second time after their discussion with Naomi Suzuki about Derek running street races in Ocean Shore. Frank demanded real answers labeling the party before Carlos's death as an alibi but all Derek talked about was marijuana, angering Frank further. Throughout the investigation, Derek was uncooperative, and even after Shawn Bailey was indicted for Carlos's murder, Derek was in the red.

The team suspected Derek of beating up Naomi and questioned Derek about that in the interrogation room. Moments later, the team unraveled an overdue speeding ticket Derek had to pay up. Frank threatened to revoke Derek's driving license unless he paid up, causing Derek to hate the police force.

Derek found himself in the red once again when Frank and the player found a torn flyer in The Little Mermaid nightclub which was pieced back together revealing Derek to be the host of an event called "Fire and Ice". The team only cared about asking Derek about Becky being in that event (in which Becky walked away from the night club without paying a $1005 US bill for cocktails she consumed) but Derek did not seem to care what Frank and the player wanted him to tell the team, and insisted that the people in Ocean Shore were here to party hard and live a crazy life.

Derek was approached by the team a second time in his flat when a picture taken by Becky suggested Derek selling drugs to interested parties, in which Derek was only selling baking soda needed to bake specialty cupcakes, but Frank wanted Derek to tell the truth, alas Derek was too drunk to do so since he had too many cocktails in one night. This suggested Derek would lie to the police just to protect his mission to become Ocean Shore's king of the hill.

It was later revealed that Derek was responsible for killing Becky Walden. Upon admitting to the murder, Derek said that the people in Ocean Shore were willing to turn a blind eye to his lucrative drug-selling business, except Becky. Reasoning that she "did not belong" and because of the picture she took of his drug-dealing, Derek tracked Becky down with a GPS and froze her to death with a liquid nitrogen canister (playing loud electronic music in the process, explaining the broken frozen bits of her body). The Honorable Dante sentenced him to life in prison.

Albert Tesla had a nasty game for Amy and the player to play: Guess which one of the five previously indicted killers (Derek included) killed Frank. Derek was found to be released from prison after they found a piece of his prison jumpsuit. He was disappointed that Frank was killed, because he was looking to killing him himself. Derek went on to explain that he went to The Wastes because it was the only place that was not burning to the ground, not because of Tesla.

Amy and the player spoke with Derek again after they found a threatening message to Frank on a canister of liquid nitrogen, which happened to be the weapon he used to kill Becky Walden. Derek confirmed he planned to kill Frank after he got arrested by a 'corrupt cop' back in Ocean Shore. Amy said that Frank was not corrupt, but Derek brought up what happened and left his cell so he could have his chance for revenge.

Derek was found to be innocent after Bobby Prince was revealed to be Frank's killer. 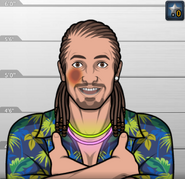 Derek, as he appeared in Death on Wheels (Case #2 of Pacific Bay). 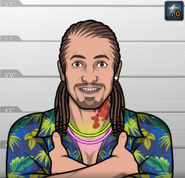 Derek, as he appeared in The Ice Queen (Case #5 of Pacific Bay). 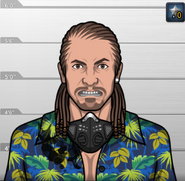 Derek, as he appeared in The Final Countdown (Case #59 of Pacific Bay). 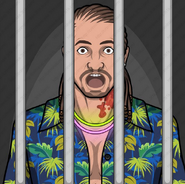 Derek, sentenced to life in jail for the murder of Becky Walden and illegal drug dealing. 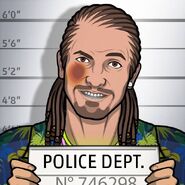 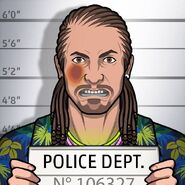 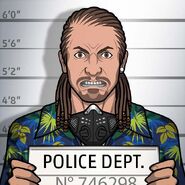 Retrieved from "https://criminalcasegame.fandom.com/wiki/Derek_Stone?oldid=475054"
Community content is available under CC-BY-SA unless otherwise noted.