Derek Molina was a suspect in the murder investigation of intern Gail Harding in Innocence Lost (Case #19 of Grimsborough).

Derek is a 28-year old venture capitalist of African-American origin. He has long, curly black hair and facial hair alongside brown-rimmed glasses. He wears a white vest and bowtie over a red and blue tartan flannel shirt. It is known that Derek takes energy drinks and uses cocaine.

Derek is a venture capitalist, whose business partner was Irina Phelps. Derek was also a famous start-up CEO and entrepreneur. When Jones and the player were searching the Stone Cold Motel's room #9 (where the victim, Gail Harding, stayed), they found a credit card receipt, but unfortunately, the credit card number was missing. After recovering the missing number, the team gave it to Alex to analyze it. When the analysis was completed, Alex told the team the number was Derek's. The team then went to Derek to ask him about the credit card receipt. 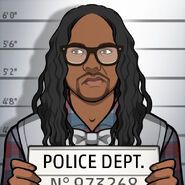 The magazine which had a small photo of Derek's face on its cover.
Add a photo to this gallery

Retrieved from "https://criminalcasegame.fandom.com/wiki/Derek_Molina?oldid=408194"
Community content is available under CC-BY-SA unless otherwise noted.