Denise was the 53-year-old former head of Space and Aeronautics Research Agency (S.A.R.A.) with long brown hair and brown eyes. She was seen wearing a white collared shirt underneath a blue jacket with a S.A.R.A. badge clipped to it. She also wore a pair of glasses, and sported red lipstick and purple nail polish.

In her first suspect appearance, it is known that Denise was an amateur pilot and took probiotics.

In her second suspect appearance, it is discovered that she drank Rocket Cow, had read 3001: A Space Audacity and rode a LegAway.

After arresting Tony Marconi's killer and bringing down DreamLife, Mayor Joe Warren tasked Gloria and the player to retrieve all data of DreamLife's activities under the dome to help in the transfer of control over their facility to the Space and Aeronautics Research Agency. However, during the retrieval, Cathy told the team that as soon as she started transferring the files to an external drive, the files began self-destructing. Soon then, Denise went to Cathy's lab and asked the team about the data after hearing that she could find the player there. Later, after being informed of the bad situation, Denise accompanied the player to DreamLife CEO Rozetta Pierre's office, where they found the override device. They then went to Rozetta's cell and forced her to unlock the device before sending it to Cathy, who was able to retrieve enough files to build a case against DreamLife and aid S.A.R.A. in their administration over the dome.

After Mia Loukas's killer was arrested, the team found out that Ad Astra (the secret organization Rozetta was a part of) had a plan dubbed "Plan Supernova" that involved the meteorite. Gloria and the player then talked to Denise to ensure that there were no threats to the meteorite. Denise told the team that all the cleanup operations were running smoothly and that the meteorite would soon be moved to S.A.R.A. facility and that nobody had been showing undue interest in it. After the team informed her of their findings regarding Ad Astra, Denise told them that they had found no mention of it yet within DreamLife's confiscated files. She then told the team she would look out for Ad Astra and Plan Supernova and inform them of any recent developments.

Denise became a suspect after Jones and the player found Doris's body at the site of the meteorite. When told about the murder, she told the team that S.A.R.A. had taken on Doris as a canteen worker after performing an extensive background check on her. She then prompted the team to investigate the cafeteria where Doris worked.

Denise was spoken to again about her anger at the victim. She revealed that Doris's food, albeit delicious, continuously irritated her sensitive stomach and made her unable to work. She told the team that she was not proud of her outburst at the victim, but explained that she had been having an especially stressful day.

Denise was found to be innocent after the team incarcerated Clyde Black for Doris's murder. Later, she informed Gloria and the player about a potential lead on Plan Supernova. She told the team that one of her movers had found a recording device containing data on human enhancement. She prompted the team to retrieve the device at the site of the meteorite and supplied them with some funds.

Denise became a suspect again after Gloria and the player found Trishna's body in the S.A.R.A. lobby. Initially in the interrogation, they questioned Denise about her ties to Ad Astra. She explained that she was keeping tabs on Ad Astra as a safety precaution and denied being associated with Rozetta. Gloria then informed Denise about the murder, prompting her to suggest to the team that they spoke with her Chief of Staff, Christine Ramsgate.

Denise was found to be innocent again after the team incarcerated John C. Birk for Trishna's murder. Later, the team discovered that Denise was, in fact, Rozetta's mother. Denise admitted to being Rozetta's mother, but told the team that she was not a criminal. She then denied being the mastermind of Ad Astra and taunted the team, saying that basing their accusations on the word of a group of criminals would get them nowhere in court.

Later on, Jones and the player found some of Denise's files and sent them to Gabriel for analysis. Since the majority of the files concerned Denise's research into genetics and biology, Gabriel consulted with Martine. Martine informed the team that Denise was obsessed with human enhancement and that Rozetta had been part of her project. After Amir looked into Rozetta's DNA records, he discovered that Rozetta had been "created" using Denise's mitochondrial DNA, meaning that Rozetta was developed in a laboratory. Denise raised Rozetta to believed that she was superior to all others, but after Rozetta was written off as a failed experiment by the time she was ten, Denise stopped taking interest in her.

Since the documents proved that Denise was the mastermind behind the human enhancement plan, Jones and the player attempted to return to S.A.R.A. headquarters and arrest Denise. However, Denise had disappeared by the time they arrived.

After arresting Christian Bateman's killer, Jones and the player sought to investigate Rozetta's past and why and when Denise turned against her. After finding Rozetta's autobiography and dispatching it to Gabriel for analysis, the team learned that Rozetta had spent her life trying and failing to impress Denise. However, Denise only took interest in Rozetta the day that the meteorite fell, prompting her to approach Rozetta and instruct her to build the dome. Once the meteorite had been exploited, Rozetta outlived her usefulness and was once again abandoned by Denise.

Interrogating Rozetta via videocall, Jones and the player learned that Denise had manipulated Rozetta into creating the superhuman serum so that they could take over the world. However, they learned that the serum was only ever meant for Denise and not for them. Rozetta then told the team that deceased Ad Astran Louis Leroux went to investigate, prompting them to search for his camera.

After finding Louis' camera and sending it to Cathy for analysis, the team learned that Denise had a secret lab. They also learned that Denise had been responsible for the blackout, ordering Felix Murray to stall Louis' progress. Jones and the player then re-interrogated Rozetta about Denise's secret lab. She told the team that she had never been to the lab. She then confessed that after Louis had been killed, the remaining Ad Astra members had taken the serum in order to fight against Denise. She then advised the player to protect themselves from Denise.

During the investigation, the team found Denise's secret lab, where she was harboring multiple humanoid species suspended in a tank solution. They later found the scientist working for her, Dr Henry Liu, dead in a back alley. After Henry's killer was arrested, the team found a hard drive that contained the documentation into the research being done in the secret lab. From it, Amir discovered that Denise had been able to successfully mutate her own DNA, which she used as the genetic code for her neohumans born in the superhuman serum. The team then found evidence of the invincibility of her "neohumans", who were able to withstand even a bullet to the hand without any pain.

They also found Denise's personal safe, from which they found documents proving that Denise had found a way to catalyze a mega-earthquake even more powerful than the one that had rocked Grimsborough over six months earlier. The team then learned that the catalyst involved the core of the meteorite. After all the events, the team deduced that Denise was planning to kill everyone but her neohumans in Grimsborough to let her neohumans rule.

When the team went to S.A.R.A., they discovered the meteorite blown up, a piece of the core taken, and Jon Benson murdered nearby. During the investigation, Denise was first spotted near Newmark Bridge then near the nuclear plant, but the team was too late to catch her both times. The team learned that Denise had contacted Jasper Everett to solve an equation for him months before the murder in order to repay for his internship in S.A.R.A. She later tried to kill the police by mailing them a package containing a bomb through Danny Williams, but the explosion was averted.

The team then met with Jasper at the reactor room, where they found a laptop running the reaction sequence with Berzelium. After Jasper was able to stop the reaction, nuclear plant manager Fiona Maris then barged in, asking why the reaction stopped. Fiona then told the team that Denise had threatened to kill her family if she did not drop the core into the reactor. The team put Fiona under arrest for helping Denise.

Later, Denise was able to free her neohumans from the lab and started to wreak havoc all over Grimsborough. The Ad Astrans - reunited by the team upon Warren's request - went to the dome in order to confront Denise and her neohumans. During the face-off, the Ad Astrans quickly learned that the neohumans were immune to their powers. Denise then shot Rozetta in the forehead before leaving the neohumans to finish off Julia and Warren.

Denise's head was discovered at City Hall, impaled on a statue. Martine revealed that Denise was decapitated while still alive, and elsewhere due to the fact that a lot of blood would've been spilt after the beheading. Martine also discovered that the strike that chopped off her head was made from right to left, meaning the killer favored their right hand. This proved the killer was right-handed.

Later, the detectives found the machete used to behead Denise at the beheading site. After they sent a sample of blood to Martine, Martine confirmed the blood was the victim's. Martine then revealed that she had also found sweat in the sample, allowing her to map the killer's partial DNA profile, which revealed a male attribute. As Denise was a woman, this meant the killer was a man.

Denise and her army were encountered by conspiracy theorist Izzy Ramsey, who was convinced that the neohuman army would be better under her control rather than a paper-pusher like her. They also learned that Denise was coercing her assistant Otto Kessel into a relationship, even keeping him close at S.A.R.A., forcing Otto to stay at the risk of losing his career. It was also discovered that Mayor Warren knew that Denise was the only one who could control the neohuman army, and in turn could be transferred over to someone else if the leader was killed. They also learned that Father Paul Sheppard had found the head at City Hall and that Chief Parker had wanted to eliminate Denise after everything that had happened to the police since they started investigating DreamLife.

In an unexpected twist, the killer turned out to be Otto.

To everyone's amazement, Otto said that the neohumans welcomed him as their new leader as he himself was a neohuman. Otto explained that Denise had him woken up and tested on multiple times throughout his development, with him growing more obedient to her orders. For the final phase of testing, Denise dared Otto to pass off as her assistant in human form. However, the longer he was out of the tank, the more aware he became of the abuse Denise inflicted on him and his fellow neohumans. As the neohumans were still fully under Denise's control, Otto decided to "free" them. Thus, when Denise was marching her army to the hill, he beheaded her so that her army would no longer have to bow down to any human. 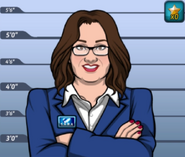 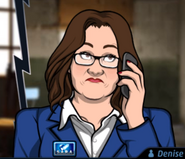 Denise, as she appeared in Eve of Disaster (Case #59 of The Conspiracy). 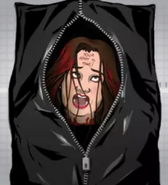 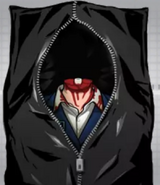 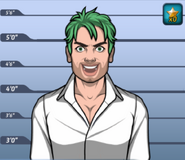 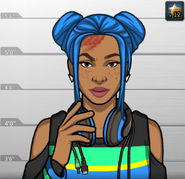 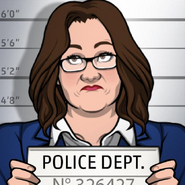 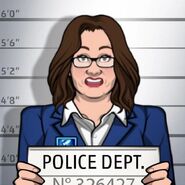