Deki (Dzo: ཧཤ) was a suspect in the murder investigation of her adoptive father/husband, monk Lam Ugyen, in Peace and Dead Quiet (Case #23 of the World Edition).

Deki is the 24-year-old adopted daughter of Lam, who later became his wife. She has black hair and a scar on her neck. She dons a pink robe, several beaded necklaces and earrings. It is known that Deki drinks chhaang.

Deki became a suspect after the player and Carmen identified the victim. When told of her father's death, she felt that he was sure he was ready. She explained that Lam adopted her when she was young, and he told her to think of death at least five times a day. She also said that despite being a little wild, she claimed the victim was a master at living life fully. She said if looking around the temple would help find Lam's killer, then they would feel free to do so, prompting the player and Carmen to look around the temple.

Deki was spoken to again after Carmen and the player were informed by Ingrid she had gone wild at the festival site. While in her drunken rage, she went on about how mad she was about the victim, doing wifely duties for him. Carmen was shocked at the victim's adopted daughter saying that, but Deki felt she was in no state to elaborate.

Deki was later found to be innocent after the team incarcerated Tashi for Lam's murder. 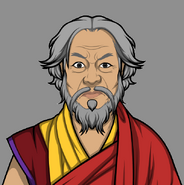 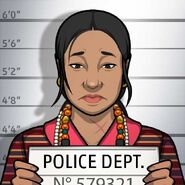 Retrieved from "https://criminalcasegame.fandom.com/wiki/Deki?oldid=489983"
Community content is available under CC-BY-SA unless otherwise noted.