Debby Gideon was the victim in A Crime Like No Udder (Case #44 of The Conspiracy).

Debby was a cheesemaker of African-American descent with dark brown eyes and tied-back brown hair. At the time of her death, she wore a white dress with a diamond pattern under a red apron with a nametag and a blue badge with a slice of cheese. She also wore red boots, a cross necklace, and ovular earrings.

Debby was found by Jones and the player at a cattle farm with her skull shattered and her chest branded. Per Martine's examination, her skull was shattered to pieces by a cattle bolt, causing irreversible brain damage. Martine also said that she was branded post-mortem and that she found switchel on the victim's branded chest, meaning that the killer drank switchel.

Later, the team found a cattle bolt at the Spring Fields church, which they then sent to Rita, who confirmed that it was the murder weapon as there was the victim's blood on it. Amir then said that he found sunscreen on the the rod in which the killer held it, proving that the killer used sunscreen.

Debby was friends with fellow cheesemaker Tallulah Shropshire in college (where they both studied cheesemaking). However, Debby stole Tallulah's boyfriend in college, making Tallulah angry enough to end their friendship. Debby did not get along with Joey Beaty as she stressed out his cows too much although she constantly insisted to see them. Debby was one of the top cheesemakers for GrimFoods, although her demands (including a cow at the cheese facility) was a logistical nightmare for CEO Fabian Roland-Tavin. AgriMeadows CEO Julia Brine also wanted to hire her, but she refused their offer. Debby was a devout member of the parish of Father Paul Sheppard, who had forbidden feelings for her.

The killer turned out to be Tallulah.

Admitting to the murder, Tallulah said that she had a crush on Father Sheppard but knew it could not be because of his vow of celibacy. However, when she noticed Father Sheppard's feelings for Debby, Tallulah began seeing Debby as a "man-stealing cow", so she shattered her skull with a cattle bolt and branded her like a cattle. Judge Powell sentenced her to 37 years in prison. 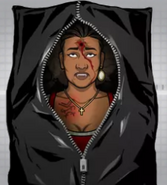 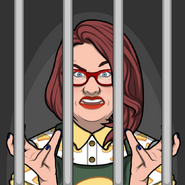 Tallulah Shropshire, Debby's killer.
Add a photo to this gallery

Retrieved from "https://criminalcasegame.fandom.com/wiki/Debby_Gideon?oldid=490858"
Community content is available under CC-BY-SA unless otherwise noted.