Hugo Mercier (All Chapters)
Carrie James (1 task in Chapter 1 & An American Cop in Paris 5)
Death by Design is a case featured in Criminal Case as the fifth case of City of Romance (Season 8) and the three-hundred fifty-seventh case overall. It is the final one to take place in the Fantasy district of Paris.

After attending the Chior fashion show in the Grand Palais in hopes of finding Carrie's brother Cody, she, Hugo, and the player went to the La Vie en Rose péniche to attend the afterparty. Upon arriving there, Chior CEO Simone Lemaitre informed them that designer Charles Pilsnerfeld had been killed. Hugo and the player then collected his drowned body to commence the investigation.

Mid-investigation, the team saved a tipsy High Commissioner Delacroix from drowning in the Seine. Later, stylist Jérémy Belhomme told the team that Charles' cat, Chouquette, had gone missing, but the team was not able to find her at the Grand Palais. The team then found enough evidence to incriminate Simone in the murder.

Simone admitted that after collaborating with her on the company for so long, Charles promised to give her total control over Chior in the event of his death. However, when Charles saw Simone change the logo to include her initials, he changed his mind, saying he would revise his will to leave the company to Chouquette. She then drowned him before he could do so. During the trial, Judge Lebrun informed her that the will had already been revised before Charles died before sentencing Simone to 35 years in prison.

Post-trial, Carrie told the player that although she did not see her brother during the fashion show, she received a message from an unknown sender reading "la vie en rose." The two then went to the péniche and found a message from Cody, a Statue of Liberty snow globe which High Commissioner Delacroix interpreted to mean that their meetup point would be the Statue of Liberty model at Pont de Grenelle. Upon going there, the James siblings reunited, with Cody saying that he deliberately sent her the postcard because he needed her help in getting him and Eleonora Macaron (with whom he was romantically engaged) out of Antoine Macaron's gang.

Meanwhile, Hugo and the player found Chouquette, who was in her cage in the péniche all along but had gone unnoticed by Jérémy. After all the events, the team resolved to first ensure that Cody making contact with Carrie after so long was not part of Antoine's schemes. They then prepared to go to the Popotin Rouge in Montmartre, where an animal smuggling ring was based according to an anonymous tip they had received.

Howard Stacy
Add a photo to this gallery

Cody James
Add a photo to this gallery 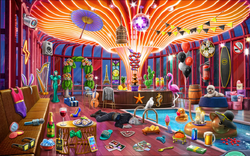 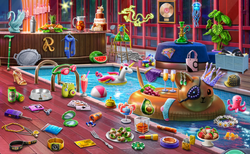 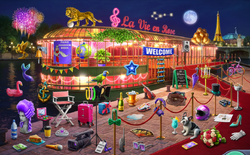 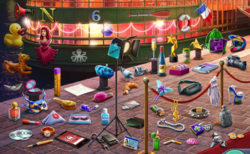 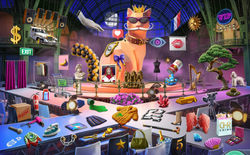 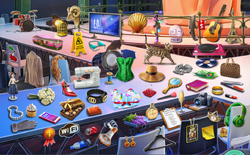 Catwalk
Add a photo to this gallery

Retrieved from "https://criminalcasegame.fandom.com/wiki/Death_by_Design?oldid=542934"
Community content is available under CC-BY-SA unless otherwise noted.