Death at a Funeral is a case featured in Criminal Case as the twenty-sixth case of Supernatural Investigations (Season 7) and the three-hundred forty-eighth case overall. It is the first case to take place in the South.

After the team's encounter with the demon queen, the team were able to successfully retrieve Hope. While she was unconscious, Arthur Darkwood advised them that her condition would improve within the day. Chief Arrow told the team that they were going to South Carolina in order to exhume his late wife Lily's body because the demon queen looked like Lily. Upon arriving at the cemetery, Luke, Ben, and the player chanced upon the burial of businessman Larry Zarus, who suddenly appeared out of the coffin, alive. Shortly after however, his business partner and one of the funeral guests, Bernie Silverman, collapsed dead, apparently poisoned.

During the investigation, Larry told the team that it was a resurrection talisman he ordered online that brought him back to life. Later, Larry began getting mobbed at the church by people begging him to perform miracles on them after seeing him coming back to life. Soon after, Chief Arrow claimed he had seen his wife, but the woman then turned out to be a stranger who only looked like her from behind, leaving him in hysterics. The team then found enough evidence to arrest Bernie's daughter, Vicki Silverman, for the murder.

Pressured by her father's expectations of her, Vicki decided to kill both Bernie and Larry in order to take over their company and prove that she was worth more than a receptionist as her father had made her out to be. She then cut the brakes on her father's car before, causing the accident that supposedly killed Larry. With Bernie surviving the crash however, Vicki then convinced their neighbor, Marilyn Bullock, to bake a cherry pie for the funeral. She then slipped poison into the pie in order to finish the job. The team then handed her over to the authorities.

Post-arrest, Ben told Felix and the player that Hope's condition had worsened, and that Arthur had advised him that Hope was put into a magical coma after being used as a key to the queen's cage, and that they needed holy water to cure her. After finding a holy water dispenser at the church, Felix figured out that someone who had cheated death needed to administer the holy water to Hope. They then approached Larry, who agreed to perform the ritual after the team found his resurrection talisman for him. With the ritual as a success, Hope finally woke up and told the team that she had run away in Massachusetts when she saw Rathimael's ring because she realized that her guardian, Bob Nelson, was a demon, thus putting her in a crisis. After relaying her guilt, she told the team that during her time with the demons, she heard that "Smuggler's Cove Lighthouse" was a demon portal.

Meanwhile, Chief Arrow asked Luke and the player to exhume Lily's grave for him as he did not feel emotionally prepared enough to do so himself. The team did so and found that her casket was empty, only containing a crowbar. Per Priya's analysis of the dirt on the crowbar, she deduced that whoever used the crowbar to steal Lily's body did so one week after Lily's death. The team then informed Chief Arrow of their findings, leaving the Chief to wonder why Lily's body was chosen for the demon queen.

After all the events, Chief Arrow and Hope reconciled and Hope came back to the team. With Felix deducing the Smuggler's Cove Lighthouse's location, the team prepared to set off for Georgia.

Marilyn Bullock
Add a photo to this gallery

Hope Newman
Add a photo to this gallery 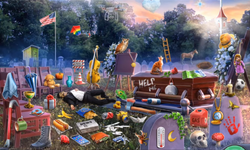 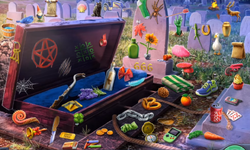 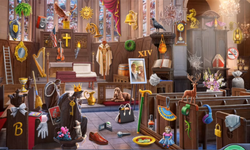 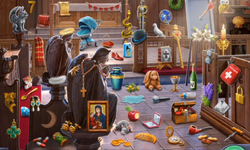 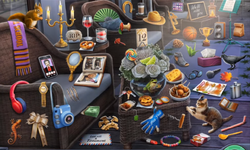 Porch Lounge
Add a photo to this gallery

Retrieved from "https://criminalcasegame.fandom.com/wiki/Death_at_a_Funeral?oldid=527972"
Community content is available under CC-BY-SA unless otherwise noted.