Death Comes to Lunch is a case featured in Criminal Case as the thirty-seventh case of Mysteries of the Past (Season 4) and the two-hundred eighth case overall. It is the first case to take place in the Wolf Street district of Concordia.

After Chief Wright reported the death of Clarissa Rochester, head of the Bank of Concordia, in her residence after organizing a luncheon, Isaac and the player went there and found her poisoned body.

Mid-investigation, the bank reported that someone had broken into Clarissa's vault. Samuel Waldorf-Ridgewood turned out to be responsible for the incident and was arrested. Later, Francine, the victim's maid, demanded that Larry Rochester be arrested after he sexually assaulted her. Eventually, the team collected enough evidence to arrest Francine for the murder.

Initially denying involvement, Francine admitted to the crime. She said that she and Clarissa were having a secret romance when the victim dumped her to adopt an orphan. Unable to let her go, she mixed her champagne with a poisonous plant during the luncheon in order to pin the murder on a guest. Judge Lawson sentenced her to 20 years in jail.

After the trial, Samuel had agreed to give Isaac and the player information about the Rochesters' activities in exchange for lesser charges. He pointed them to the terrace, where he had forgotten a camera with incriminating pictures. After finding the camera, the team retrieved a film roll which (per Diego) proved that Horatio Rochester had met with Vittorio Capecchi. Horatio said that he had bought Vittorio's lands without knowing his scheme and with the approval of the city council. The team talked to Deputy Mayor Hwang, who refused to investigate the accusations without solid evidence.

Meanwhile, Charlie and the player helped Maddie recover from her hangover and she allowed Charles to live in her house's spare room. Following these events, Evie reported that Clarissa's death had pushed the bank to crisis, causing the stock market to collapse.

Sandra Hwang
Add a photo to this gallery 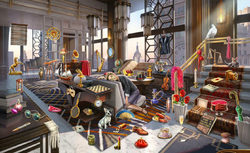 Vault Drawers
Add a photo to this gallery

Retrieved from "https://criminalcasegame.fandom.com/wiki/Death_Comes_to_Lunch?oldid=482649"
Community content is available under CC-BY-SA unless otherwise noted.