David had slick, gray hair turning white, as well as brown eyes. At the time of his death, he wore a blue shirt over a grey undershirt.

After Martine received news of his death, she, Gloria, and the player went to the steak house to retrieve his body. Martine conducted an autopsy, which proved that David died of a cardiac arrest caused by an overdose of amlodipine, a blood pressure medication one of whose shipments had been reported missing. However, Martine said that the amlodipine alone would not have killed him and said that he must have ingested (most likely drunk) something that would increase the drug's potency.

Gloria and the player then talked to steak house waiter Tyler Schultz regarding him. Tyler identified him as David, the dad of one of his friends. Tyler said that David was undergoing tough times with a divorce and a custody battle ahead. Tyler said that he offered David a cola on the house, but he turned it down in favor of a can of Rocket Cow he had brought in. After Gloria and the player found the Rocket Cow, they sent it to Martine.

Martine confirmed that the caffeine in the Rocket Cow would have boosted the amlodipine's effect enough to cause cardiac arrest in him. However, Martine could not rule out the possibility of suicide instead of murder given David's current state. Chief Parker transferred the investigation of his death to another precinct.

Soon after solving Ian Devine's murder, the team discovered more cases of people who died of sudden heart failure due to a mixture of amlodipine and Rocket Cow. Because of this and the missing amlodipine shipment, the team concluded that David did not commit suicide but instead was murdered by a serial killer. 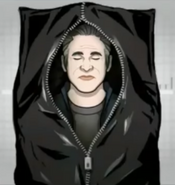 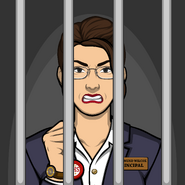 Rosamund Wilcox, David's killer.
Add a photo to this gallery

Retrieved from "https://criminalcasegame.fandom.com/wiki/David_O%27Connell?oldid=408190"
Community content is available under CC-BY-SA unless otherwise noted.