Dave Simmons was a suspect in the murder investigation of mortgage broker Ned Dillard in Corpse in a Garden (Case #2 of Grimsborough).

Dave is a 39-year-old real estate agent with brown eyes and hair. He dons a beige suit over a white shirt and a blue tie. Furthermore, he has a missing tooth and sports a bandage on his right cheek.

Dave was a witness to the murder of Ned Dillard. In addition, he owned the house Ned lived in and was there to sell the house.

Dave was ultimately found innocent of the murder, but was seen around the primary crime scene during the Additional Investigation of the case. Jones and the player thought he was hiding something, and found some documents which showed that Tony Marconi wanted to buy some properties whose mortgages were held by Ned. This made the team think Dave was involved in Marconi's businesses, but he refused to talk.

Dave was mentioned by Alden Greene, who stated that he was going to call Dave in order to discuss the selling of an abandoned house located right across the street from the Greene's home since he wanted to buy it for his grandson (as a gift) when he would be released from prison (because Alden still believed that his grandson was innocent). 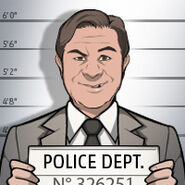 Retrieved from "https://criminalcasegame.fandom.com/wiki/Dave_Simmons?oldid=408186"
Community content is available under CC-BY-SA unless otherwise noted.