Darren Hong was a suspect in the murder investigation of CEO Constance Tan in A Stab in the Dark (Case #32 of World Edition).

Darren is the 47-year-old CEO of Lion Dot Holdings, and the deputy to the late Constance. He has graying black hair and dons a white dress shirt and a blue tie underneath a black suit jacket with a name tag. It is known that Darren eats durian fruit, practices silat and drinks Singapore Sling.

Darren first became a suspect after Carmen and the player found a notepad that revealed that he and the victim had a rather late meeting. He was shocked that Constance was dead and said that their late meetings were regular for them. He felt her death was a tragedy for the company, wondering what they were going to do now that Constance was dead. Darren had to cut the interrogation short, saying he needed to alert the rest of Lion Dot Holdings of Constance's death.

Darren had to be interrogated again about the victim's reward that he defaced. He admitted he drank too much and wrote his name on the award because he felt it should have been his. He wanted to be the head of the victim's company, saying he worked more than the victim. When Carmen proposed he killed Constance to become CEO, Darren said that was not how it worked in the business world, but felt the company would go in the right direction with him at the helm.

Darren was later revealed to be innocent after the team incarcerated Anbu Devanesan for Constance's murder. 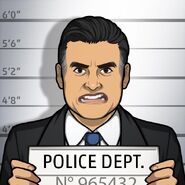 Retrieved from "https://criminalcasegame.fandom.com/wiki/Darren_Hong?oldid=408188"
Community content is available under CC-BY-SA unless otherwise noted.