Darius Wexler was a suspect in the murder investigation of forest creature Bigfoot in One Bigfoot in the Grave (Case #2 of Supernatural Investigations).

Darius is a 72-year-old cryptozoologist and curator of a cryptozoology museum. He has balding, disheveled gray hair, a mustache, a beard and profound wrinkles. He wears a white shirt with an orange checkered tie under a buttoned purple vest and a dark green pinstripe blazer. He also sports a pair of black glasses and is seen holding a brown walking stick in his right hand and a blue book entitled "THE SASQUATCH MIND" and some papers in his left hand. It is known that Darius eats trail mix, wears hiking boots and uses bug repellent.

Luke and the player first encountered Darius when they arrived at the bigfoot museum per the recommendation of lumberjack Elwood Grimes. After the team claimed that they were journalists for the Bigfoot Daily Gazette, Darius allowed them to look around the museum.

Darius became a suspect after Luke and the player found his map of the crime scene. He explained that the map demarcated the paths that the local bigfeet had traveled most recently, according to reported sightings. When told that the team had found a dead bigfoot, he acted shocked, saying that while he had followed the movements of the bigfeet, he had never made contact with one. He then offered to take the body off of the team's hands when their investigation was over.

Mid-investigation, at the bigfoot museum, a skull fell on Luke's head. Darius helped remove the skull from Luke's head and apologized for the incidence.

Darius was spoken to again about the trap that he had set for Bigfoot. He admitted to setting the trap, telling the team that he could not bear the thought of dying without seeing a bigfoot face-to-face. He told the team that he was desperate and begged them not to tell anyone about what he had done.

Darius was found to be innocent after the team incarcerated Elwood Grimes for Bigfoot's murder. Elwood revealed that Darius had offered to pay for his replacement tools if he caught Bigfoot for him, resulting in Elwood unintentionally killing Bigfoot. Armed with this information, Luke and the player confronted Darius about his involvement in the murder. He scoffed, reminding the team that they had no legal authority over him.

Even though they could not get Darius arrested over his involvement in the murder, Luke and the player ventured to find another criminal charge to get him on. At the museum, they found an amber amulet. Per Felix, the amulet could be used to summon almas and had been stolen from the Institute of Pre-Byzantium in Turkey. Luke and the player alerted the police to the theft and watched as Darius was arrested. 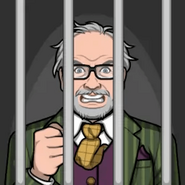 Darius, arrested by the police for stealing artifacts.
Add a photo to this gallery

Retrieved from "https://criminalcasegame.fandom.com/wiki/Darius_Wexler?oldid=514234"
Community content is available under CC-BY-SA unless otherwise noted.