Danny Gibbs was a suspect in the murder investigations of his brother, family doctor Greg Gibbs, in Flatline (Case #7 of The Conspiracy) and photographer Jordan Coprolite in Muddying the Waters (Case #25 of The Conspiracy).

Danny is a 25-year-old crisis worker. He has curly black hair and wears glasses. He wears a pink shirt with vertical stripes under a fluorescent lime safety jacket with reflective stripes. The jacket has a breast pocket where he keeps a pen and a ruler. He also wears a GritFit wristband on his left wrist, a surgical face mask around his neck, and holds a flashlight in his left hand.

In his first appearance, it is known that Danny smokes electronic cigarettes.

In his second appearance, his clothes as well as his surgical face mask are dirty. It is discovered that he knows knots and plays polo.

Danny first met Gloria and the player after helping an injured Ruby Armstrong due to an aftershock that had hit Grimsborough. He then became a suspect after Gloria and the player found a photo that revealed he was the victim's brother. After being informed of the murder, he broke down and told them that Greg was loved by the Fairview community and had been supporting the Crisis Center's efforts. He then excused himself to have an electronic cigarette.

Danny was spoken to again after the team found Greg's diary and learned that Danny was jealous of his brother. When being asked, he told them that he had always been over-shined by his brother and that Greg was always patronizing everything that he did. He then told the player that now that his brother was gone, his family would appreciate him for the star that he was.

Danny was found to be innocent after the team incarcerated Richard Harding for Greg's murder. However, he was later spoken to about the district's foundations. Danny told the player that he had reviewed the blueprints for the Financial Center and would be working with Ruby and Roman Harris to start reinforcing the district. He then thanked the player for their help in the matter.

Danny became a suspect again after Jones and the player found his flood relief disaster kit in Grimsborough West Bridge. Danny was happy to see the team again and said he had been handling sandbags for days. When being asked about Jordan, the victim, Danny did not know him and said that his rescue and relief team had no rest.

Danny was interrogated again after the team found out he defaced the victim's picture. He admitted that he lied about not knowing Jordan and said the victim was a time-waster and a mess. Danny explained that the victim called him several times a day and said his house was flooded. But when he rushed over, it turned out Jordan was so high he did not realize he was in the bathtub, and then Jordan did not let him leave. Danny said that he had real emergencies to handle, but the victim just focused on himself.

Danny was found to be innocent again after Anuj Ghosh was incarcerated for Jordan's murder. 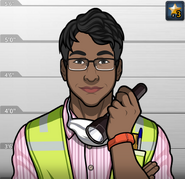 Danny, as he appeared in Flatline (Case #7 of The Conspiracy). 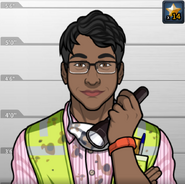 Danny, as he appeared in Muddying the Waters (Case #25 of The Conspiracy). 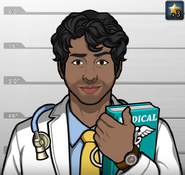 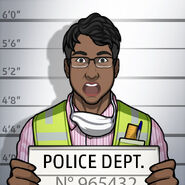 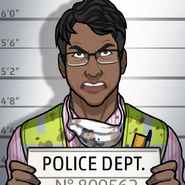 Retrieved from "https://criminalcasegame.fandom.com/wiki/Danny_Gibbs?oldid=483010"
Community content is available under CC-BY-SA unless otherwise noted.