Danny Doyle was a suspect in the murder investigation of golfer Tony Webb in Drive, Swing, Die (Case #46 of Grimsborough).

Danny is a 39-year-old man with black hair and green eyes. He wears an orange-white golfing hat, a green T-shirt and a white air-punched sports shirt. It is known that Danny plays golf, drinks wine and uses strawberry soap.

Danny was the personal caddy of the golfing legend, Tony Webb.

Danny was called into the investigation after Jones and the player investigated the thermal baths and found a locked phone with a call history featuring Danny. The team wanted to ask Danny a few questions about his relationship with the victim. Danny simply told the team that he was Tony's caddy, but when he was informed of Tony's passing, Danny left in tears.

Danny was interrogated a second time moments after the team investigated the golf cart and found a torn flyer pieced back into a brochure. He stated that it was a brochure to travel to Spain, because Tony was blacklisting him and he could not play anymore in Grimsborough, so he wanted to travel to Spain. In an act of cooperation, Danny gave the team an envelope that was directed towards Tony before the day of the murder, which the team managed to find useful for the remainder of the investigation.

In the midst of Harold Knight's indictment, the police had to calm Danny down in the hours after the case was closed. 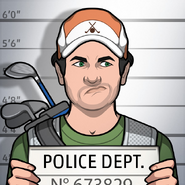 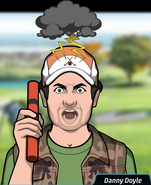 Danny, as he appeared in the Additional Investigation of the case.
Add a photo to this gallery

Retrieved from "https://criminalcasegame.fandom.com/wiki/Danny_Doyle?oldid=408168"
Community content is available under CC-BY-SA unless otherwise noted.