Daniel is a 42-year-old now-former actor. While his hair is kept in a tentacle-like shape, he wears a pair of goggle-like spectacles. He dons a blue space costume, accompanied by the badge of an infamous cult on the right side. Besides that, he sustains an acid burn on his forehead and sports blue makeup on his face. It is known that Daniel uses talcum powder.

Daniel found himself in trouble after Amy and the player found a promotional poster of Warzone Pacific in the props room of the movie's set, with the player using the police database to identify Rex's co-star as being Daniel. During the interrogation, Daniel admitted to be the upcoming movie's co-star albeit his role was not going to be as important as Rex's. He then pleaded with the player to find the killer for the filming of Warzone Pacific to continue, to which Amy replied that catching the killer was more important than filming the movie at the moment. However, Daniel felt that the movie was important to him since it would generate income on the long run, and knew that the film's cast wouldn't be paid if the project got canceled due to murder.

Amy and the player later made another trip to the set of Warzone Pacific, only to find a tablet filled with e-mailed conversations between Daniel and the movie's producers, realizing that the actor was initially supposed to be given the lead role. Moreover, tech expert Hannah had to research record after record of Warzone Pacific, thus finding out that Rex used his connections to get the lead role and that Daniel did not take the news well. This discovery led the team to approach Daniel for a second conversation, in which he claimed that he was supposed to be given the lead role, but because Rex "peeked" at the script, he opted to nab the lead role for himself.

Daniel's pride and jealousy would ultimately turn out to be the motive for Rex's murder after all the criteria incriminated him as the killer. Although Daniel refused to admit to the crime once Amy and the player attempted to arrest him, he eventually conceded by stating that Rex was untalented and was not fit to star in any film project. Daniel believed that Rex abused his Utopian faith to get the lead role of Warzone Pacific, which prompted the co-star to label the victim as a traitor to the Utopians. In addition, he wanted Rex gone so that he could have some time to shine in Ivywood, not to mention that he wanted to make the Utopians proud. Furthermore, Daniel felt that the victim was not well-synchronized with the cult's faith. So, to fool the player, he stole a bottle of acid from the costume designer's prop room, threw it at Rex when he and the victim were alone on the set, and configured the corpse to resemble the Utopian statuette of "Adel"—a legendary Utopian figure who, according to a Utopian mythology, was accused of betraying his brothers and breaking the teachings of the cult's faith. Daniel thus fled the scene, hoping that the acid would destroy the evidence. The player was foolproof in the investigation per Amy, so Daniel was shipped to court.

In court, Judge Dante informed Daniel that he was not qualified to convict extraterrestrials (due to Daniel wearing heavy makeup for the movie's filming), but the actor replied that it was understandably nothing more than just makeup. Despite his alleged xenophobia, the judge then concluded that a murder is a felony, thus issuing a 30-year jail sentence to Daniel for grand homicide. 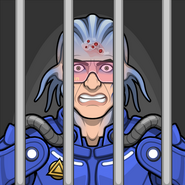 Daniel, sentenced to 30 years in jail for the murder of Rex Logan. 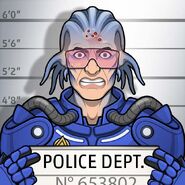 Retrieved from "https://criminalcasegame.fandom.com/wiki/Daniel_Lambert?oldid=409181"
Community content is available under CC-BY-SA unless otherwise noted.