Dan was seen amongst a group of riot students at Highsmith University's library, who believed that they saw a monster with tentacles roaming the university after university student Eric Prynce's murder. Gwen and the player told the students that there was no point in causing a riot, prompting Dan and the students to leave.

Dan's body was found at an archaeological dig outside the Smithsonian Museum with a scarab amulet in the hand of his blackened left arm. Despite initial suspicions that Dan had been electrocuted, Ben confirmed that the scarab amulet in Dan's hand was the murder weapon. The tissue necrosis had started in his hand, spread up his left arm and reached his heart, stopping it from beating. Ben could not find any sign of the amulet being rigged, although he noted that Dan was only clutching the top half. He found traces of a natural insomnia remedy on Dan's neck, most likely left behind when the killer checked his pulse. This led Ben to conclude that the killer had insomnia.

Later, Luke and the player found the lower half of the scarab amulet in a toolbox at the excavation site. Priya found bandage adhesive residue on the amulet. She hypothesized that the killer had handled a bandage with their gloves on; the adhesive had transferred from the scarab to the gloves and then to the amulet. This allowed Priya to conclude that the killer had a bandage.

Dan had been assigned to the excavation site by his thesis advisor, archaeology professor Theresa Rosenthal. While working at the site, he found evidence to believe that Pharaoh Sephtah VI had built a city where Washington DC now stood. Despite this, Theresa saw his theory as hare-brained and rejected his thesis. Dan had befriended Smithsonian Museum curator Cleo Sinclair, only for them to fall out when she discovered that he was trying to use her to gain access to restricted archives. FBI consultant Reggie Pratt spied on Dan as the FBI believed that he was connected to an antiquities smuggling ring. Dan had discovered the sarcophagus that contained the mummy of Sephtah VI and the cursed scarab amulet. Ignoring warnings from supernatural hunter Falcon, Dan proceeded to open the sarcophagus and take the amulet, awakening the mummy.

The killer turned out to be Theresa.

Theresa said that she was getting tired of Dan's theories about Ancient Egyptians in Washington, D.C. and regarding the scarab amulet. To prove to him that ancient curses were not real, Theresa threw the amulet at him. After Dan instinctively caught it without his gloves, the curse travelled from his palm up to his heart, killing him. The team then delivered Theresa to the authorities. 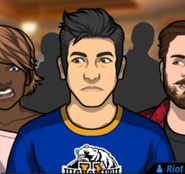 Dan, as he appeared in No Leg to Stand On (Case #21 of Supernatural Investigations). 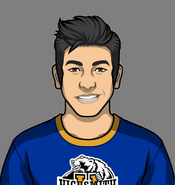 Dan, as he appeared in Scarab to Death (Case #24 of Supernatural Investigations). 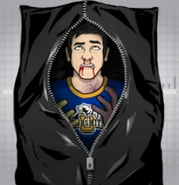 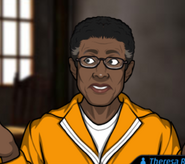 Retrieved from "https://criminalcasegame.fandom.com/wiki/Dan_Quang?oldid=529521"
Community content is available under CC-BY-SA unless otherwise noted.