Daisy Woods was a suspect in the murder investigation of skincare entrepreneur Beckett Blanton in Buzz Kill (Case #16 of The Conspiracy).

Daisy is a 33-year-old customer of Beckett's Bumblebees. She has long blonde hair under a maroon hat and blue eyes concealed behind a pair of sunglasses. She wears a blue collared shirt with white polka dots under a pair of maroon overalls. She also wears a blue badge, a bracelet with a colorful print, and is seen carrying a brown book bag. It is known that Daisy drinks kombucha, has a coloring book and rides a bike.

Daisy became a suspect following Gloria and the player identification of her photo on a testimonial for Beckett's Bumblebees. Daisy showed great sorrow for the loss of the company's founder, saying that the victim's products and workshops was great for her skin complexion. However, she only knew as much of him to know that he had complete confidence over his work.

Later after Chief Parker told the detectives of a vandal at the victim's workshop, they witnessed Daisy breaking a flowerpot before she told them that she would trash the workshop. After she was stopped, she said she was afraid to tell the detectives at first, but she explained that she was hospitalized and diagnosed with mercury poisoning. She had gotten so weak and she was sure that the mercury came from the victim's products despite all tests coming back negative.

Despite Daisy's willingness to destroy Beckett's company, Prisha Chandra was incriminated for the unintentional homicide. 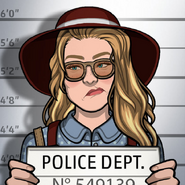 Retrieved from "https://criminalcasegame.fandom.com/wiki/Daisy_Woods?oldid=408184"
Community content is available under CC-BY-SA unless otherwise noted.