DJ Blood was the killer of partygoer Lucy Winters in Blood Lust (Case #1 of Supernatural Investigations).

DJ Blood is a vampire disguising as a 29-year-old disc jockey. He has dyed red hair shaved at the sides and sports black eyeliner. He wears a black leather jacket over a dark gray shirt emblazoned with a stylized beige goat skull with a crimson pentagram surrounded by orange fire. Additionally, he sports silver rings on four of his fingers, a silver hoop earring through his left earlobe and a pair of maroon headphones. Moreover, he sports two necklaces: one of a white skull; another of a low-hanging silver biohazard sign. It is known that DJ Blood is allergic to garlic, drinks Bloody Mary and reads Byron.

DJ Blood became a suspect after Gwen and the player learned that he was the DJ for the crypt party. He was shocked to learn about the murder, telling the team that the victim was a fan of his. He then told the team that he would write a song about her death.

DJ Blood was spoken to again about his restraining order against the victim. He revealed that Lucy had sent him a lot of letters and often followed him around. When she broke into his house, he took action and took out the restraining order. However, he told the team that he did not blame her.

In the end, it was proven that DJ Blood was Lucy's killer. He admitted to killing Lucy, who had wanted to be turned into a vampire after seeing him drink blood when she broke into his house. When he finally caved in to Lucy's requests, Blood bit her, intending to drink a little of her blood in exchange for transfusing his blood in her. Not having tasted fresh blood in a long time however, Blood could not resist sucking her dry. The team took him to the leader of the US vampire coven, Dr Aculus, who sent him to his ancestral castle in order to stay in the dungeons for at least fifty years. 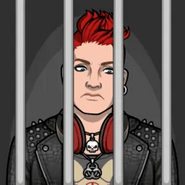 DJ Blood, sent by Dr Aculus to his ancestral castle in order to stay in the dungeons for at least fifty years for the murder of Lucy Winters.
Add a photo to this gallery

Retrieved from "https://criminalcasegame.fandom.com/wiki/DJ_Blood?oldid=520060"
Community content is available under CC-BY-SA unless otherwise noted.