Mayor Désiré Bower was a suspect in the murder investigations of popular ice skater Juan Rodrigo Vasquez in Hearts of Ice (Case #26 of Pacific Bay) and urban legend hunter Roberto Vasquez in The End of the Night (Case #30 of Pacific Bay).

Désiré is the 72-year-old mayor of the Love Village, located up in the mountains of White Peaks. Désiré has white hair, brown eyes, tanned skin, and a mustache. He dons a pink dress jacket, white-blue striped dress shirt, a red tie with hearts, and a "MAYOR" lanyard around him. Moreso, he wears a mountain brooch and a flag of America on the left side of his dress jacket.

In his first appearance, Désiré sports a red rose on his dress jacket. It is known that Désiré eats cherry liquor chocolates.

In his second appearance, he ditches the rose and it is discovered that he likes riddles, smells of blackberries and uses snow chains.

Désiré welcomed the team of Amy and the player to the Love Village, but the tour was terminated after the player found an ice skater named Juan Rodrigo dead on top of an ice statue with his head sliced. Désiré felt Juan Rodrigo was everything to the village citing that his death would bring despair to the romantic front and as such, the player questioned Désiré.

Désiré would be up for another round of questioning after the player found a snow globe (with a message directed to Juan Rodrigo) during the team's second trip to Juan Rodrigo's chalet. The message (unraveled by the player) warranted a second conversation with the mayor. Désiré told the authorities Juan Rodrigo insulted the village at times due to the victim's beliefs that Love Village wasn't large enough. This suggested Juan Rodrigo had dreams to land stardom in Ivywood Hills. On the other hand, Désiré suggested that many tourists would also come to try and see the notoriously mythical creature known as the Night Walker, which would be the new attraction for Love Village.

Désiré was exonerated after a heartbreak was found to be the driving motive of murder. In the aftermath of the case's closure, Désiré requested Frank's service to ensure bravery medals directed to Duncan Young was supplied properly. Désiré also wanted Frank and the player to unearth reasons as to why Duncan was incapable of serving in the Pacific Bay Police Force through a newspaper article left in the White Peaks Candy Shop.

Désiré found himself in trouble after Amy and the player found a poster (with the player matching the stamp of the Love Village) in which he tried to make the Night Walker legend a fad, making him a suspect of Roberto's murder investigation.

Désiré asked Amy and the player whether or not they were chasing ghosts, but Amy countered the mayor by presenting him his tablet, telling him that he was using his tablet to stalk Roberto. Amy further told Désiré that week after week he would stalk and threaten Roberto, but the mayor didn't like the rumor-spreading the victim was committing. The junior cop then told Désiré that anyone could be the Night Walker—perhaps it could be Désiré himself. Désiré was sweating after he was interrogated twice by Amy and the player, but was fortunately safe after Amy was forced to put the law over family in an emotional arrest. 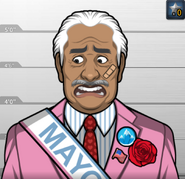 Désiré, as he appeared in Hearts of Ice (Case #26 of Pacific Bay). 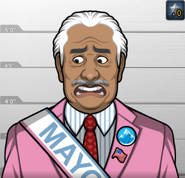 Désiré, as he appeared in The End of the Night (Case #30 of Pacific Bay). 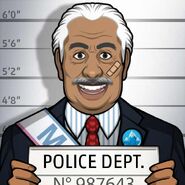 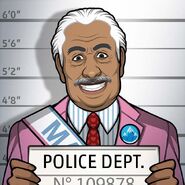 Retrieved from "https://criminalcasegame.fandom.com/wiki/D%C3%A9sir%C3%A9_Bower?oldid=528665"
Community content is available under CC-BY-SA unless otherwise noted.