Courtney Guerra was a suspect in the murder investigations of sorority paintball team captain Sam De Witt in Deadeye (Case #39 of The Conspiracy) and philosophy professor Kevin Charles in Lashing Out (Case #42 of The Conspiracy).

Courtney is a 21-year-old student at Grimsborough University. She has brown eyes as well as long red hair that is tied back.

In her first appearance, she wears a red Zeta Rho Theta crop top under a camouflage tracksuit jacket which is stained with blue paint. Additionally, she sports maroon nail polish and wears a silver and red necklace. It is known that Courtney is a sharpshooter, has read The Art of War and drinks Blast-Off Brews.

In her second appearance, Courtney ditches her camouflage tracksuit jacket and wears a black jacket instead. It is discovered that she knows knots, supports the Grimsborough Quails and eats instant ramen.

Courtney became a suspect after Gloria and the player found a poster advertising the start of paintball season, which showed Courtney and the victim. The team then went to ask Courtney about her rivalry with Sam. Talking about Sam's murder, Courtney denied killing her, saying that the team could not accuse her of murder just because she was the victim's rival team captain. Courtney then told the team that although she and Sam had their conflicts, that came with the territory.

Courtney was spoken to again after the team found out that she had given a basket of sponges to the victim along with a text message. When being asked about her strange gift to the victim, Courtney angrily told the victim that Sam was a "wiper". She then explained that the victim had cheated at the previous year's paintball determining match by wiping off the paint, making her team went on the state finals instead of Courtney's team. Courtney then said that she had given the sponges basket to Sam in order to shake her confidence, so that Courtney's team would win the match.

Despite her frustration with Sam, Courtney was found to be innocent after Monica Pozie was revealed to be Sam's killer. However, Gloria and the player then talked to Courtney again after finding out from Cathy that she was involved in Ad Astra. When being asked about this, Courtney revealed that Ad Astra had disbanded when the original founder Rozetta Pierre went after bigger projects, however, it was resurrected one year ago, when the meteorite fell on Grimsborough. When the team questioned her further, Courtney refused to give more answers.

Courtney became a suspect again after Jones and the player (per Cathy) tracked her down. She was told about the murder, to which she feigned ignorance. Jones then told her that the team had found Rozetta's card which had instructed Ad Astra to "take care" of the professor. When asked about her alibi, she said that she was at the scenic viewpoint all night. She was then asked about the location of Azeeb Patel, but gave no answer.

Courtney was spoken to again about the target she made of the victim. She revealed that the professor had gotten Gregory Lynn to spy on her and her friends. When she confronted the victim about his actions, he claimed that he was trying to identify students at-risk of being murdered. She then threatened to choke Kevin if he failed to leave her alone.

Courtney was found to be innocent after the team incarcerated Polly O'Brien for Kevin's murder. But she was later revealed to have taken part in the murder along with the rest of Ad Astra when Azeeb admitted that the group had taken turns whipping Kevin to death. It was later revealed that Courtney had been the one responsible for chloroforming the victim. Courtney then stood trial along with leader Dorothy Kix and Lucius Roth for the murder and was sentenced to 30 years in prison by Judge Powell. 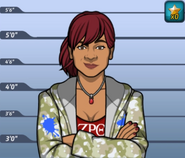 Courtney, as she appeared in Deadeye (Case #39 of The Conspiracy). 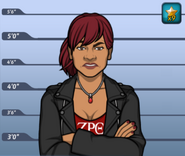 Courtney, as she appeared in Lashing Out (Case #42 of The Conspiracy). 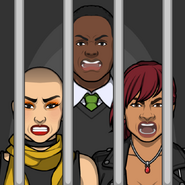 Courtney, along with Dorothy Kix and Lucius Roth, sentenced to 30 years in prison for being the accomplices to the murder of Kevin Charles. 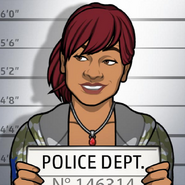 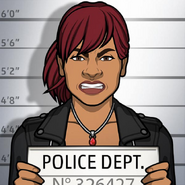 Retrieved from "https://criminalcasegame.fandom.com/wiki/Courtney_Guerra?oldid=467487"
Community content is available under CC-BY-SA unless otherwise noted.