Count Damien von Blutsauger was a suspect in the murder investigation of poet Edgar Woe in Graveyard Shift (Case #44 of Mysteries of the Past).

Damien is a 77-year-old count. He has short graying black hair and blue eyes. He wears a red and black cape over a gray suit with patterned red lapels, a red waistcoat and a white shirt with a silver bat ornament. It is known that Damien has a cat named Lucifer, knows vampire lore and drinks red wine.

Damien became a suspect after he invited Isaac and the player to dinner. He explained that he had invited them as he had heard about the murder and wanted to explain his version of the events, especially considering he was a self-proclaimed vampire. He told them that the victim had broken into his castle, wishing to see a "real vampire", but he sent him on his way. He then gave Isaac and the player his blessing to have a look around his castle.

Damien was spoken to again about a recording device that recorded a conversation between him and the victim, where the latter laughed at the former's vampire pretense. He revealed that he had spent a lot of time on his vampire impersonation, and had been humiliated when Edgar failed to believe his act, greatly angering him.

Damien was found to be innocent after the team incarcerated Annabel Leigh for Edgar's murder. 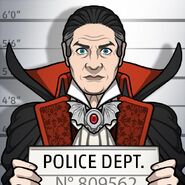 Retrieved from "https://criminalcasegame.fandom.com/wiki/Count_Blutsauger?oldid=532216"
Community content is available under CC-BY-SA unless otherwise noted.