Cosimo Silvestri was a suspect in the murder investigation of prisoner Kev O'Connell in Death Without Parole (Case #25 of Mysteries of the Past).

Cosimo is a 41-year-old (now-former) prison guard. He has short black hair and wears black cap with gold strips. He dons a black buttoned coat over a white shirt and is seen holding a baton. It is known that Cosimo chews tobacco, knows the Bible and is right-handed.

Cosimo became a suspect after the player and Maddie found his truncheon by the victim's cell. He said that he was at the shed to relieve himself around the time Kev was killed. When he finished, he found him dead. He mostly worried he could get canned for this, it did not help that he thought Kev was trouble, being an Irish gangster and stirring up the prisoners and all.

Cosimo was spoken to again about a note on some boxing gloves given to the victim, telling him not to lose. All he claimed was he wanted Kev to prove how great of a fighter he was, feeling that prisoners were violent all the time and he was just giving them a proper outlet. With that said, Maddie started to suspect that Cosimo was making bets on him, however Cosimo said they had no proof he was getting money out of it.

Cosimo was found to be innocent after the team incarcerated Jeremiah Shankshaw for Kev's murder. But Maddie and the player had to speak with him again about allegations that the Italian mob was ruling the prison. He was offended they would suspect he had anything to do with it since he was Italian, and claimed he had no ideas regarding any gangs. So Maddie and the player looked around the courtyard in order to find the evidence they needed. 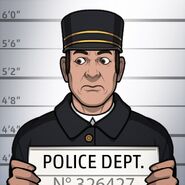 Retrieved from "https://criminalcasegame.fandom.com/wiki/Cosimo_Silvestri?oldid=426436"
Community content is available under CC-BY-SA unless otherwise noted.