Criminal Case Wiki
Register
Don't have an account?
Sign In
Advertisement
in: Cases, Cases in City of Romance, Fantasy

Hugo Mercier (Chapters 1‒3)
Carrie James (Chapter 1, 1 task in Chapter 2 & An American Cop in Paris 1)
Gauthier Delacroix, Enzo Traoré & Émile Bardot (An American Cop in Paris 1)
Corpse Chic is a case featured in Criminal Case as the three-hundred fifty-third case overall. It is the first case of City of Romance (Season 8) and also the first one to take place in the Fantasy district of Paris.

After Chief Delacroix welcomed the player and Carrie (loaned from the Los Angeles Police Department), he had them meet up with Hugo to investigate a high-profile murder. The three then went to Pont Alexandre III to collect the body of model Elise Marx, who had been poisoned.

Mid-investigation, High Commissioner Delacroix arrived at the station, arguing with Nadia over cinnamon-infused Paris-Brests from Café Le Froufrou. Because the autopsy had earlier revealed that the killer had eaten those pastries, Hugo and the player went to the café to investigate while Carrie stayed behind to finish her paperwork with the High Commissioner. Later, the victim's fans started a riot, which the team were able to peacefully disperse. The team then found enough evidence to arrest model Alexis Cardinot for the murder.

Alexis told the team that Elise used him as a sex toy, but their relationship turned abusive with Elise wanting to control everything in his life. When Alexis told her he did not want to be her sex toy anymore, Elise threatened to release humiliating photos of him online. Not wanting his image, career, and family ruined, Alexis laced Elise's perfume with rat poison to prevent her from posting the photos. Judge Lebrun then sentenced him to 27 years in prison for the murder.

Post-trial, Carrie told Chief Delacroix and the player that she had actually gone to Paris to find her long-lost brother, Cody, who had sent her a postcard from there. The team then helped her find the postcard, where he said was among the pigeons and rats of Paris. The Chief concluded that Cody had joined Antoine Macaron's gang of "Pigeons and Rats", but Macaron did not give them useful information, telling them he did not remember everyone under his employ.

Meanwhile, Enzo and the player went with Émile to get a photograph taken by photographer Lola du Maurier to use as his profile picture in a dating app. After all the events, with Carrie telling the rest of her team about her motives, the team then decided to take a break at Café Le Froufrou before continuing on. 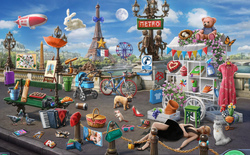 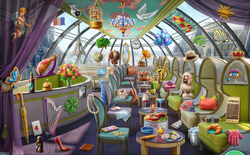 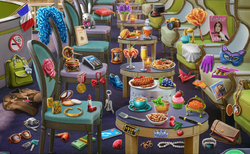