Constantin is the 65-year-old supervisor to the castle of Versailles. He has short gray hair and green eyes. He wears a white collar shirt under a dark brown suit jacket with a gold fleur-de-lys brooch on his right lapel. He also wears a red diamond-patterned cravat around his neck, a black beret and matching black round spectacles. He is also seen holding a black, yellow and brown pipe in his left hand. It is known that Constantin eats camembert, smokes and reads French philosophy.

Constantin was first interrogated after the player and Carmen found an article of him. He was informed of Annette's murder during his lunch, and knew of her photoshoot as well. He allowed it because of how the victim was a high-profile personality, and not just anyone is allowed to use the castle as they see fit. Constantin was worried that with the murder, Versailles will get the wrong kind of reputation.

He was spoken to again after they found a text from him to the victim on her phone. Since it was in French he revealed it meant that he had enough of the photoshoot the victim was holding. He did not like how the victim brought a guillotine into the castle and how she would constantly argue with her photographer, making him worry that something would break. He went on to say that Versailles is a national treasure and believes it should be treated with respect.

Constantin was later proven to be the killer. Initially denying the crime, Constantin admitted that he had wanted to live like a king after being surrounded by the wealth of the Versailles for a long time, so he immediately killed Annette after being paid to do so by people who wanted to procure the manuscript. After refusing to tell who paid him and admitting he hid the manuscript after the murder, Constantin was sentenced by Judge Adaku to 25 years in prison.

Carmen had to interrogate Constantin as she promised to the player for clues as to where he hid the manuscript at. All Carmen knew was that the same group of people who threatened Enid to kill Prince Albert or else used a torn page from the manuscript Constantin seized. Money was the reason why Constantin opted to return the manuscript to the wrong hands, so she had to initiate the audit and as long as this group was on the loose, given more lives would be a risk. All Constantin remembered was that he left the manuscript at the Louvre gardens, but could not remember the exact spot. The moment Carmen and the player found what Constantin stole, they required Dupont's intervention to decipher as to why the manuscript happened to be important to Perrier. 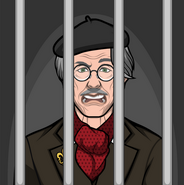 Constantin, sentenced to 25 years in jail for the murder of Annette Sommeur. 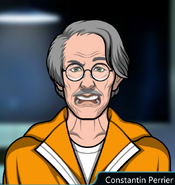 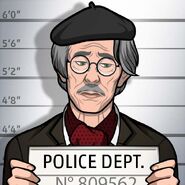 Retrieved from "https://criminalcasegame.fandom.com/wiki/Constantin_Perrier?oldid=545435"
Community content is available under CC-BY-SA unless otherwise noted.