Constance Bell was a suspect in the murder investigations of three people in Grimsborough before being suspected of the murder of lawyer Stella Ziarati in Stonewalled (Case #8 of The Conspiracy).

Constance is a 59-year-old librarian who has gray hair held in a bun by two red hairpins. She wears thick taupe-rimmed glasses and a voodoo necklace.

In her first appearance, she wears a black dress underneath a sedona brown cardigan with a librarian's badge. It is known that Constance takes medication.

In her second appearance, Constance replaces her librarian badge with a curator's badge. It is discovered that she speaks German.

In her third appearance, she sports her librarian badge and a new purple cardigan. It is revealed that she knows witchcraft and owns a black cat.

Between her third and fourth appearances, it is revealed that she wrote The Woman Warrior.

In her fourth appearance, she wears a green cardigan and sports a new bead necklace along with a new feather necklace. Additionally, she has new black glasses with a strap. It is noted she drinks Bendrick's gin and tonic.

Constance showed up when Jones and the player arrived to search her library while investigating the murder of Cooper High School student Simon Armstrong. Constance knew Jones ever since he was a little boy and did not like him for some reason. When the team had come to Constance's library, she had ordered Jones not to touch any of her books.

After finishing the search, the team asked Constance if she knew anything about a mysterious book called Necronomicon which they had found at the murder scene. The librarian replied that the precious book was stolen from her library vault by a delinquent named Simon Armstrong. The team then informed her that her book's thief had been murdered. When asked why she did not report the theft of her book, Constance answered that she did not because it was very special. Constance had become suspicious in the team's view because she had not even batted an eye after hearing about Simon's death.

While searching the library's desk, the team found the victim's library card in some voodoo accessories on the bookshelves. This made the team go and talk to Constance once again. When asked what Simon's library card was doing in the voodoo ritual stuff, Constance replied that the victim deserved to be punished after he had stolen a precious book (Necronomicon) of hers, but Constance also claimed that voodoo could not carve people's skin at a distance. She said that she had learned voodoo from her grandmother, who had made her promise not to use it for evil, and for that reason, Constance just cursed Simon so that he would get the worst of luck until her book returned. She then concluded that her curse had not killed Simon, but it might have put him on the path of his killer.

Constance became a suspect again after Claire Godwin was found electrocuted in the Wollcrafts' garage. She appeared after the team finished investigating the Grimsborough Museum's exhibition hall. When asked what she was doing there, Constance told the team that she was replacing Cornelia Trent, the former curator who was arrested previously. Before interrogating Constance, the team had found a skeleton in the museum which was missing bones, and discovered that Victor Wollcraft had stolen it to reanimate his dead dog, Elphaba (2005-2013).

When asked if she had noticed the skeleton's missing bones, Constance replied that she did not care, and angrily told the team that she had a diploma in Foreign Languages, and not in museum keeping. She then said that the only thing she did since becoming the curator was to fire Claire Godwin, one of the museum's guides. The reason was: when Constance said that she wanted to set up a taxidermist exhibition, Claire, as an animal rights activist, found it wrong and told Constance that taxidermy was cruelty towards animals and that it should have been illegal. Claire was then fired thirty minutes later and could not clear up her locker since she did not have enough time. Afterward, Constance gave a letter to Claire for the team for Grace to analyze.

Constance was interrogated for another time when the team went to ask her about the whereabouts of Percy Wollcraft, one of her guides who had run away after fighting with his father about Claire. When asked about it, Constance told the team that it was a marvel that Percy ran away since he had lost his girlfriend and his parents were a bunch of freaks. When Jones said that it was not funny and that Percy's mother, Fran Wollcraft was devastated, Constance replied by saying that Fran did not care about her son. She also said that she had talked to Fran a few times in German and that Fran never seemed to be sentimental. Constance then informed the team that she was hiding Percy in the staff room. When asked why she was helping Percy to hide, she answered that the boy was hard working and he needed a place to hide from his parents.

Moments after Tess Goodwin was burned to death, the team read a letter mailed from Tess shortly before her death, suggesting the team consult Constance to grab extra evidence useful in incriminating the Crimson Order. Jones requested Constance's help to investigate a crime scene as if the natural harbor was November of 1649 as there was no way the team could investigate a crime scene in the past. As opposed to her Historical Center appearances, Constance was much more cooperative in this investigation, as she was willing to help the team through storytelling, and her willingness to issue clues her clan held for 4 centuries.

The first trip to the past involved Mary Goodwin's execution for illicit witchcraft, which revealed the fact that Mary had sensitive information about the Crimson Order's crimes and was intending to out them to the public. The Crimson Order could not allow Mary to expose them, so to ensure their secrecy, Mary was tried and executed for witchcraft, according to Constance's first story of the past.

Constance would take the team back to the past moments after Morgan Goodwin told the team that Mary received help from the Bell family. Constance would help the team but made it clear that it would involve her ancestor Claire Bell. Claire had to comfort Mary since she was in serious trouble for her crimes against the Crimson Order. Claire agreed to retain Mary Goodwin's notes through centuries, preserved by the Bell family, something Constance was aware of, which also caught the team's attention. Therefore the team kept Mary's notes as evidence to expose the Crimson Order's treacherous ways.

The team would approach Constance one final time regarding Chief King's fate. Constance told the team that after Donna King was slain by Shane Kolinsky 10 years ago, the Chief visited the Nautical Museum in his free time. Constance gave Donna's blueprint to the team hoping that it would aid them in finding reasons for the Chief's suicide. The team managed to locate a discreet cache containing Chief King's suicide letter, which finally explained the reason as to why the fallen hero took his own life. The team went to Constance to thank her for her unconditional cooperation and told Constance not to tell Cathy King anything about their findings until the Crimson Order was brought down. Constance told the team to be very careful as after her deep cooperation in the affair, feeling that the player was needed more than ever.

Constance became a suspect once again after Jones and the player found the library's computer containing Constance's list of people with overdue fees at the library, on which there was the victim's name. After becoming reacquainted with Jones and displaying her dissatisfaction at seeing him again, she was questioned about Stella. She told them that she would check out law books and never return them on time. Jones then informed her of the murder and, upon asking her if she knew anything else, was reminded that there must be silence in the library.

Constance was spoken to again about a voodoo doll that she had made of the victim. She informed them that four years prior to the investigation, the Grimsborough councilors decided to reevaluate the status of the city's historical monuments. When she asked the victim to help her maintain the status of her library, Stella refused, leaving her to live in fear of the library being demolished or sold ever since.

Constance was found to be innocent once again after the team incarcerated Guadalupe del Prado for Stella's murder. 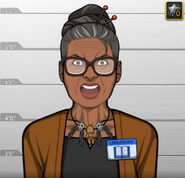 Constance, as she appeared in The Summoning (Case #26 of Grimsborough). 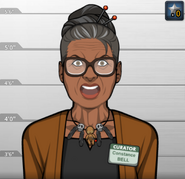 Constance, as she appeared in The Wollcrafts' Creature (Case #30 of Grimsborough). 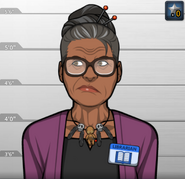 Constance, as she appeared in Ashes to Ashes (Case #55 of Grimsborough). 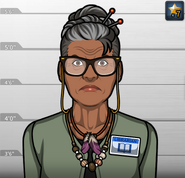 Constance, as she appeared in Stonewalled (Case #8 of The Conspiracy). 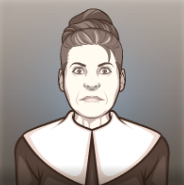 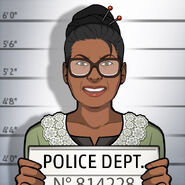 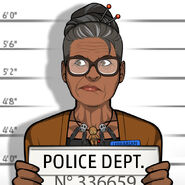 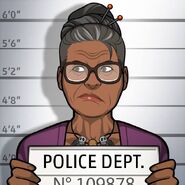 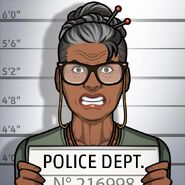 Retrieved from "https://criminalcasegame.fandom.com/wiki/Constance_Bell?oldid=538451"
Community content is available under CC-BY-SA unless otherwise noted.