Constable Ramirez, appearing as a recurring character in Season 4 of Criminal Case, was a suspect in the murder investigation of Squad inventor Charles Dupont in Last Stand for Justice (Case #60 of Mysteries of the Past), prior to which he made multiple minor appearances throughout the season.

42 years of age, Ramirez is bald, save for gray hair at the sides and gray mutton chops. He has brown eyes and a black mustache. He wears a blue coat with silver buttons over a white shirt and black tie, with a badge of the Concordian Police Department pinned on it. As of Out of Steam and onwards, he wears a blue cap with a police badge on it.

Per his suspect appearance, it is known that Ramirez knows Morse code, uses a compass and eats canned pineapples.

Constable Ramirez contacted the Concordian Flying Squad during Rowdy Rick's murder investigation and told them that his life was in danger. In Rowdy Rick's room, Isaac and the player found Maggie Scrubber threatening to hit Ramirez with a frying pan for trespassing on her property. When Ramirez refused to leave in order to secure the scene, Maggie delivered a blow to his head, causing him to faint. He woke up shortly after and escorted Maggie to custody.

When the team walked into Officer Whimple's office to arrest him, Ramirez informed them that Whimple had left the place moments before their arrival. This prompted the team to look for him at the train station, fearing an escape attempt.

During an investigation, an angry mob of protesters went to the transportation pavilion, threatening to destroy all the inventions there. Ramirez went to inform the team, and Maddie and the player rushed to the pavilion as fast as possible to stop the protesters.

On another investigation, Kiki the giant ape was tranquilized by Rose and was held in the police temporarily. However, when she was starting to wake up and escape, Ramirez rushed to the Squad to tell them, and they were able to stop the escape in time. Later, after Ernest Picklebrain's killer was arrested, Ramirez informed the team that Greta Gundwood wanted to talk to them.

Constable Ramirez then went to the Squad's airship to inform them that someone had been found dead at the base of the newly-finished Exhibition Tower. Later, when Isaac and the player talked to Chief Wright, they found out that it was the chief who had sent him to the airship as he needed to monitor the scene himself.

Ramirez went to the Squad's airship and informed them that a delivery truck belonging to the Irish gang was intercepted on the nearby street. Maddie and the player went to the site to investigate the gang and their transactions, only to find the body of distiller Davy Byrne. Later, he told the Squad that there were rumors of the police not investigating murders. Isaac and the player then investigated the claims.

Soon afterwards, Ramirez phoned the Squad from the park, saying that he was under attack. When Maddie and the player rushed to his aid, they found him covered in lipstick stains. He said that the prostitutes saw him in the park and started swarming around him, kissing him non-stop. Maddie and the player concluded that the prostitutes wanted to distract the constable from the investigation into Joseph Dante's murder, as they did not want the killer of the "Scarlet Slayer" to be incriminated.

Ramirez later went to the Squad's airship and informed them that the Scarlet Slayer had struck again and that there was a body in a Moulin Rose bedroom. There, Isaac and the player found Gladys Perrin's body. Later, Ramirez went to court to inform Judge Lawson that Fiona Flanagan, who was to go on trial for the murder of Gladys and countless other prostitutes, had escaped from the police's custody.

Upon Fiona's murder, Ramirez stumbled upon an abandoned train car, and took a quick look inside. From the smell and from the images on the wall, he concluded that it was the Scarlet Slayer's hideout. He went to the airship and informed the Squad of his findings.

Ramirez ran into the Squad's airship, scared after seeing what he believed to be a ghost in Devil's Ridge town square. Isaac and the player investigated the place and found the spirit, which turned out to be none other than Dick, who was glowing after self-experimenting with Aurora Osborne's blood.

During the murder investigation of Benjamin Galls, Ramirez accidentally released the farm's fowl and chased after them. After the investigation was closed, Ramirez reported that a train crashed nearby after the tracks were sabotaged.

Ramirez came to the Squad's airship and reported a nearby train derailment due to someone sabotaging the tracks. Isaac and the player went there, only to find the body of train robber Danny Dedalus. During his murder investigation, Ramirez and the team found the victim's hideout, which was owned by Gibby Hayes.

After the arrest of Seamus O'Neill for Vittorio Capecchi's murder, Ramirez went to inform the team that Seamus wanted to talk with them.

During the murder investigation of Thomas Boyd, Maddie and the player found a parking fine issued to the victim by Ramirez. He claimed to remember the victim well because Thomas would habitually commit traffic offenses at the same location. Later, Ramirez found the victim's car near the docks.

Midway through another investigation, Ramirez found the location where the Italians had been meeting. There, he caught a glimpse of the Italians brandishing guns.

Upon Ramirez's report, Maddie and the player went to Crimson Bridge, which was set ablaze due to the gang war. There, they collected the decapitated body of plumber Bridget Baker. Later, Ramirez would find the victim's head in a children's playground, before reporting it to the team. He then came back to tell them that Antonio "The Scorpion" Dante was found pouring kerosene on the playground. Finally, Ramirez came back to report that he had seen Seamus with a fake beard in the playground.

Ramirez came to the Squad's airship to report a murder at the Wolf Street Stock Exchange. Maddie and the player went there to find the body of Abner Milton. During the murder investigation, Ramirez revealed that an anonymous tipper said that the victim had gotten into a fight with someone at the Stock Exchange.

Midway through the Deputy Mayor's murder investigation, Ramirez urged Isaac and the player to return to the courtyard of the Duophol Mansion after thinking he heard a bomb there. The sound turned out to be the victim's beating heart.

Ramirez came to the Squad's airship to report a murder at the cemetery, saying a vampire had sucked someone dry of blood. Isaac and the player went there to find the body of Edgar Woe.

Ramirez also alerted the team to a murder at Claiborne Hotel, resulting in Maddie and the player finding the body of Admiral Oak.

During the murder investigation of Patricia Rochester, Ramirez found her treehouse in the asylum gardens, prompting Isaac and the player to investigate her hideaway.

During Lissa Avery's murder investigation, Ramirez came to the Squad's airship to report a woman claiming to be Lissa's mother raving at the park. Maddie and the player went there to calm her down.

Later, Ramirez informed the Squad that the city's opera house had phoned the police to report the murder of ballet choreographer Marta Ulanova. Isaac and the player rushed there to retrieve her body

After the arrest of Archie Rochester's killer, Ramirez informed the Squad that there were gunshots fired in the courthouse. Isaac and the player rushed there and found Deputy Mayor Lawson non-fatally shot in the shoulder.

Later, during the investigation into Mayor Cornelius Castletown's assassination, Ramirez told the team that at the St. Shamdrew's Golf Club, they had found disgraced and former Chief Inspector Eleanor Halsted, who had killed Celine Georges by pushing her off the Exhibition Tower, had accepted bribes from gang leaders, and had been responsible for the attempted assassination of the deputy mayor.

Ramirez came to the airship to fill the player in on the role of the police in Mayor Lawson's new regime in the six months since his inauguration. He said that the police had to answer to the newly-formed Justice Corps, who Lawson had given the right to arrest anyone who spoke out against the regime, instilling fear in the Concordian people. He also said that the police were practically puppets of the Corps. During Judge Takakura's murder investigation, he reported a disturbance in the courthouse.

Later, Ramirez phoned the Squad to inform them of a dead body he found on the river shore, before notifying the Justice Corps. Maddie and the player rushed there, only to find baker Albertina Thenard's body.

Ramirez then reported a murder at the town square after the Justice Day party, prompting Isaac and the player to collect the strangled body of telegrapher Jane Pembroke.

While Maddie and the player were investigating Charlie's murder, Ramirez went to the team and admitted to seeing him before the murder. After saying he did not go on the airship, he said that Lawson had put him on patrol duty on the streets much like the rest of the police department. He then claimed to have come across Charlie while doing rounds on the top of the Concordian Tower, but did not get a chance to talk to him as he had left in a hurry.

Later, Maddie and the player found Charlie's broken DNA machine, stained with Ramirez's pineapple juice, indicating he was on the airship. Ramirez said that he received direct orders from Lawson to guard the airship and ensure no one entered or exited. As he stood guard, he got curious and went inside the airship, searching all the offices and labs before stumbling upon Charlie's corpse in his lab. In a panic, he fled and knocked over the DNA machine, damaging it.

Ramirez was proven to be innocent after Diego was arrested for the murder. 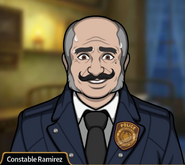 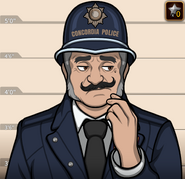 Constable Ramirez, as he appeared in Last Stand for Justice (Case #60 of Mysteries of the Past). 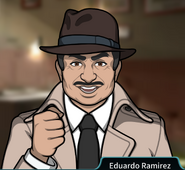 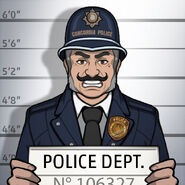 Retrieved from "https://criminalcasegame.fandom.com/wiki/Constable_Ramirez?oldid=543079"
Community content is available under CC-BY-SA unless otherwise noted.