The Concordian Flying Squad acts as an independent unit for criminal investigation in the city of Concordia, making its appearance in the fourth season of Criminal Case.

The Concordian Flying Squad was assembled to be a law enforcement agency independent of the Concordian Police Department, which had been riddled with corruption for the prior years. They were formed to capture all law-breaking officers to finally rid the police of corruption.

The Concordian Flying Squad investigates murders in the city of Concordia, searching crime scenes for clues, interviewing witnesses and suspects, and carefully analyzing evidence in order to progress. After gaining all the criteria, the force is able to apprehend the actual killer behind the murder and put them behind bars.

Meanwhile, the Flying Squad also finds evidence of corrupt activity within the Concordian Police Department to bring them to justice.

Ten people, including the player character, have acted as members of the Concordian Flying Squad over the course of the game, with each of them assigned a particular job:

The player arrived in Concordia after taking part in their first case on Liberty Island with Maddie, before ending up solving of the murder of Lieutenant General Frank Vogel, head of the New Haven Immigration Center. Whilst investigating, the player met most of the members of the Squad, the last of them being Isaac. The two met shortly after a district-wide fire had broken out.

The Squad then uprooted the first sign of Concordian Police Department corruption during the investigation of Father Donovan's murder by arresting evidence room clerk Edward Whimple, signifying a start to the Squad's original mission. Its next main accomplishment in eradicating police corruption occurred when solving World Exhibition participant Celine Georges' murder, an investigation in which Chief Wright became a suspect. Eventually, Chief Inspector Eleanor Halsted was identified as Celine's killer and the Exhibition's saboteur.

The car as seen in the mobile version.

Maddie and Isaac in an in-game artwork promoting Mysteries of the Past.

Maddie and Isaac pop up as the player receives his/her final score in a crime scene. 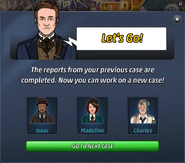 Isaac, Maddie, and Charles after filling reports for the player.
Add a photo to this gallery

Reveal artwork for Mysteries of the Past.
Add a photo to this gallery