Composed of ten districts, Concordia is a booming Victorian city of innovation and new beginnings in the late 19th century, despite the presence of feuding gangs and a corrupt police force. The Concordian Flying Squad is the featured law enforcement agency that serves the city.

Concordia features a total of sixty cases, which are located across ten different districts:

Based on 1900s New York, New Haven is the first district investigated in Concordia. It focuses on the flocking of immigrants from all over the world, most notably Ireland, to the city of Concordia, where they clash with frustrated native Concordians. It also focuses on a city fire burning down the police's evidence, as well as the possible involvement of Father Donovan in an evil scheme.

Cases #1-#6 are situated in this district.

Elysium Fields is the second district of Concordia. Hosting six soirées for the elite annually, the district focuses on investigating these parties held by the unseen Mr Alastor, who seems to be holding the parties for murders to occur.

Century Mile is the third district of Concordia. A district boasting architectural and technological advancements and innovations, it focuses on the World Exhibition, where various inventors and scientists are presenting their works, which are being sabotaged by a mysterious saboteur. It also focuses on Judge Takakura's retirement and Justin Lawson's desire to be the new city judge.

Wolf Street is the seventh district of Concordia. Based on Wall Street, the financial district of Concordia initially focuses on investigating the Rochester family's involvement in the movements of the Italian gang in Coyote Gorge. It then focuses on a financial crisis set off by the murder of a Rochester, and a company that promises to save the people from bankruptcy.

Grim Chapel is the eighth district of Concordia. Known as a "ghastly district" of asylums and the supernatural, the district focuses on investigating the Rochesters' dealings, including the death of their enemies in "freak accidents" there, and the dark background of the mental asylum, Gryphon Sanctuary. Furthermore, it deals with a murder consultant known as "the Devil", as well as Justin Lawson's candidacy for deputy mayor.

Ivory Hill is the ninth district of Concordia. The political heart of the city, the district focuses on fighting against the corrupt and morally bankrupt Rochester family, who plan on reclaiming Concordia as their own to establish a new city-state under their own rule. It also focuses on Justin Lawson's adjustments to his new job as deputy mayor.

Capitol Peak is the tenth and final district of Concordia. With Justin Lawson abolishing the free press and forming a militia as he assumes the position of mayor, the district focuses on the Squad opposing his radical and oppressive regime involving puppet police forces, spontaneous arrests, and death sentences while avoiding getting shut down by Lawson himself.

Mysteries of the Past teaser depicting the various locations to be found in Concordia. 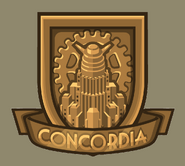 The Old Ale House, a tavern.

The Brass Compass, a café.

Bull Mine, a gold mine.

Concordia Tower.
Add a photo to this gallery

Retrieved from "https://criminalcasegame.fandom.com/wiki/Concordia?oldid=528045"
Community content is available under CC-BY-SA unless otherwise noted.