Colum O'Callaghan was a suspect in the murder investigation of gang leader Seamus O'Neill in In Love and War (Case #36 of Mysteries of the Past).

Colum is a 30-year-old Irish farmer. He wears a forest green cap and has short red hair, a mustache and a beard. He dons a forest green vest with a lavender flower over a stained creamy white shirt. Additionally, he is seen holding a sack of potatoes over his shoulder. It is known that Colum wears Eternal Youth Cologne.

Colum became a suspect after the player and Maddie identified him from a picture of him and the victim found at the Capecchi's old house. He was surprised to hear of Seamus' murder, saying he had just arrived to surprise him, but got distracted on his way from the docks. It made him sad he would never see Seamus again, and that they would not accomplish their potato farm dreams.

Colum was spoken to again about a newspaper article about the potato famine going on in Ireland, with a quote from him saying that it was the victim's fault. He said the victim and him had plans to build the largest potato farm Ireland had ever seen, but Seamus turned his back on him. The victim had come to Concordia to make money to return home, but thanks to everything that had happened he forgot about them, which made Colum lose his entire crop of potatoes. So he came to Concordia for answers, only to find that Seamus was in the midst of a gang war.

Colum was found innocent after the team incarcerated Adrienna Brassiere for Seamus' murder. 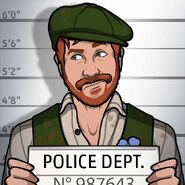 Retrieved from "https://criminalcasegame.fandom.com/wiki/Colum_O%27Callaghan?oldid=415401"
Community content is available under CC-BY-SA unless otherwise noted.