Colin Stokes was a suspect in the murder investigation of stripper Trixie Velvet in Beautiful No More (Case #8 of Grimsborough).

Colin is a 22-year-old Caucasian man with ruffled brown hair and brown eyes under his glasses. He has an acne problem with spots across his face. Slightly bucktoothed, Colin wears a yellow turtleneck sweater under neath a silver cardigan. It is known that Colin is in contact with cats and wears Eau d'Homme.

Colin is a projectionist at a Grimsborough cinema.

Colin was brought in for questioning when Jones and the player asked Alice August if she knew anyone who would kill Trixie. She recommended Colin because Colin had a history of stalking Trixie (it was revealed later that Colin had kept a box of photos of other girls along with the victim). The team investigated his workplace and found a necklace that Trixie wore. Grace told them that the necklace came in pairs: one for you and one for your lover. When Alice was arrested, Colin was let off.

However, Ramirez wanted the team to issue a restraining order on Colin, as plaintiffs are complaining about Colin "ogling" women in the city. The team had a chance to investigate Colin's property for a roll of film which Colin kept safe, and Jones felt that he needed to give the roll of film to the plaintiffs right away. Jones warned Colin to stop stalking but Colin snapped at the team saying that the cops stole his work, but for violating the restraining order (snapping at cops is a felony in Grimsborough), Jones fined Colin 5,000 coins for the player. 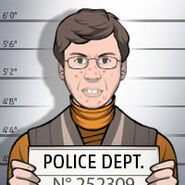 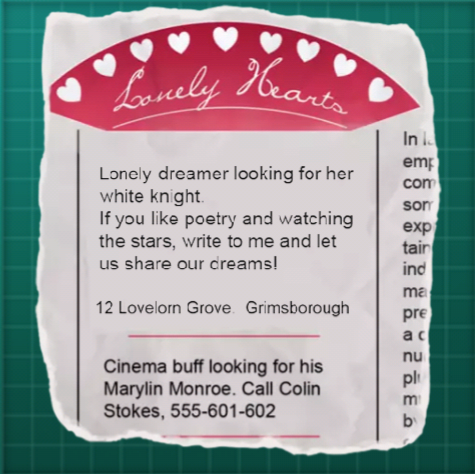 A classified ad written by Colin in the Lonely Hearts column of the Grimsborough Gazette daily newspaper.
Add a photo to this gallery

Retrieved from "https://criminalcasegame.fandom.com/wiki/Colin_Stokes?oldid=408127"
Community content is available under CC-BY-SA unless otherwise noted.