Colin O'Brian was a suspect in the murder investigation of his brother, local Irish priest Angus O'Brian, in Spineless (Case #14 of Pacific Bay).

Colin is a 28-year-old man who has brown hair and a hairy beard and mustache. He wears a green with white stripes shamrock hat. He wears a black coat that has a grease stain on the left side and has a bruise on his chest. It is known that Colin uses a jump rope and drinks beer.

Colin is the brother of the late Angus O'Brian.

Colin was called into the investigation when the team found his sleeping bag outside Angus's church, in which Colin did not like anyone touching his stuff. Colin thought his brother's death served him justice because Angus stated that Colin was allowed to stay outside in spite of Angus's religious nature. Frank thought Colin's words were a solid reason for a murder, but Colin countered that killing relatives did not fit Irish values under any circumstances.

Colin was due for a second discussion with the team when the team found Colin's fight bib stating he was disqualified from the fight tournament for a reason, in which Colin responded that Angus issued Colin beer after beer to prevent Colin from arriving on-time for the fight tournament judging from Angus's selfishness of money, in which Colin stated that Angus, although a priest, was very good in cheating and lying, making Colin a strong suspect in the murder until the killer was incriminated and found guilty of grand homicide. 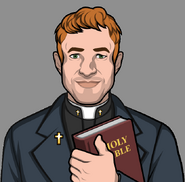 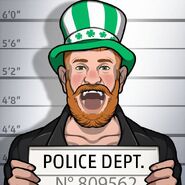 Retrieved from "https://criminalcasegame.fandom.com/wiki/Colin_O%27Brian?oldid=413798"
Community content is available under CC-BY-SA unless otherwise noted.