Colette Eckhardt was a suspect during the murder investigation of her boyfriend, chess player Casper Rove, in Checkmate (Case #14 of Mysteries of the Past).

Colette is a 20-year-old chess enthusiast. She has long braided ginger hair under a white hat with a maroon stripe. She dons a vermilion blouse with a collar decorated with a white stripe. She also wears a white neckerchief and pearl earrings. It is known that Colette drinks espresso, has hearing loss and plays chess.

Colette became a suspect after Isaac and the player found a photo of her with a message she wrote at the back: "Casper, you are my champion! See you at the expo! Forever yours...". Isaac thought it was funny that Casper never mentioned her, since the message implied romantic attraction between the two. Initially, Colette was angry that the player had looked through Casper's belongings but then expressed her shock upon finding that he had been murdered. She immediately broke down, saying that he was her reason for living and asking what she would do without him.

Isaac and the player found Casper's journal with the endgame that Casper had used to become a world champion. Isaac noted that the chess moves were a study of a potential match, and that the handwriting was not the victim's. After noticing a note at the bottom reading "Casper + Colette", Isaac and the player went to talk to her to see if she knew what it was about. Colette said that Casper wrote the note, meaning he loved her. Isaac proved that she wrote it instead of Casper, judging by the handwriting. She denied writing the endgame, saying it was all Casper's genius. When Isaac questioned why she would hide her authorship of the endgame, Colette responded by saying that Bron Sklar didn't think it was elegant when she showed it to him before the world championship. When asked, she said that she didn't feel upset that Casper won instead of her, believing that it was better for everyone.

Colette was later found innocent after Bron Sklar was incarcerated for Casper's murder. 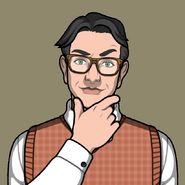 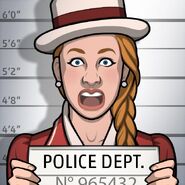 Retrieved from "https://criminalcasegame.fandom.com/wiki/Colette_Eckhardt?oldid=415352"
Community content is available under CC-BY-SA unless otherwise noted.