Colette Bordeaux (2004-2014), appearing as a minor character in Criminal Case, was mentioned during the events of Cloudy with a Chance of Murder (Case #19 of Pacific Bay).

Colette, the only child of Marie Bordeaux and the niece of the late Clifford Grady, was born in 2004 and died in 2014 at the age of 9, only weeks before her 10th birthday. She was a victim of the destructive storm known as Hurricane Yves which hit Jazz Town three months prior to the events of the case. Apart from that, Colette had black hair and blue eyes, and sported the same necklace as her mother along with a deep blue dress with a yellow triangle pattern.

During the murder investigation of local weatherman Clifford Grady, Amy and the player restored Colette's memorial invitation card and, upon further inspection, noticed it was addressed to Clifford. Colette's mother, Marie, was also mentioned on the card so the team did not hesitate have a conversation with her.

Marie was devastated as she missed Colette day in and day out, and all she had left was her cat. Marie went far to blame Clifford for her daughter's tragic death since Clifford had failed to forecast the destructive hurricane known as Hurricane Yves, which then decimated the town and took away the lives of many innocents, including Colette's. After Colette's death, Marie took a chance and invited Clifford to the memorial hoping that he would apologize to her for Colette's death, but he never showed up, which infuriated Marie to the fullest.

Marie was due for a second conversation with the team after a photo revealed Clifford to be Colette's uncle. Marie admitted Clifford was her brother but stated that she did not consider him family after Colette's death. Marie further explained how she was teaching French the day Hurricane Yves hit and had no choice but to send Colette under Clifford's responsibility as she would not have been able to take care of her for the time being, in which Clifford willingly agreed to take care of his niece. However Clifford failed to protect Colette from the merciless storm, the reason as to why Marie claimed she would never forgive her brother since she firmly believed Colette's death was on him.

Colette's death became bittersweet after Marie was found guilty of grand homicide. Clifford's failure to protect Colette prompted Marie to disown him as a brother but what really drove Marie to kill Clifford was that Marie invited Clifford to attend Colette's funeral to force him to feel guilty of his actions and negligence including but not limited to apologizing Marie for the negligence he committed. Since Clifford did not show up to Colette's funeral, Marie opted to kill Clifford to punish him for his wanton negligence. 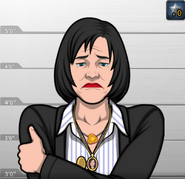 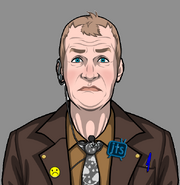 Retrieved from "https://criminalcasegame.fandom.com/wiki/Colette_Bordeaux?oldid=408134"
Community content is available under CC-BY-SA unless otherwise noted.