Colbie Arbor was a suspect in the murder investigation of her mother, Mayor Annette Arbor, in Uncivil Rights (Case #47 of Pacific Bay).

Colbie is a 19-year-old member of the Anti Robot League and the daughter of the victim. She has long, curly blonde hair and green eyes. She wears a hoodie over a yellow shirt which she leaves unbuttoned. She also sports some badges and an oil stain on her hoodie, a blue handkerchief inside the pocket, a necklace around her neck, and a pair of green glasses.

Colbie was first interrogated after the player and Frank identified her on a picture of her and the victim. She and her mother never got along too well due to the victim focusing more on her career than her daughter. Once Colbie started to mature, she began to understand that politics is a lot of hard work. She was sad to hear of her mother's death and wished she had the chance to say she respected her for her hard work in politics.

Frank and the player talked to Colbie again after seeing her on TV telling the people of Innovation Valley to revolt against robots. She acted like she had nothing to do with the ARL, but after saying they recognized her on TV, she confessed that she made that speech. Colbie believed that robots were the root of all evil, and she tried to stop them behind her mother's back. She went on to say the victim was too ignorant to realize that she was ruining people's lives by helping the robots. Frank and the player then proceeded to cuff her for incitement to violence.

Despite being a strong suspect, Colbie was found innocent for her mother's murder after Larry Newark was incarcerated. However, the team was not finished with interrogating her yet. After finding a diary saying to destroy the robots, the team sent it to Russell to find out who wrote it. Russell managed to uncover it was written by a female member of the Anti-Robot League, and the team immediately thought it was Colbie. She firmly believed that the robots will destroy mankind, due to how many are taking over Innovation Valley and the growing power of Meteor Systems. Colbie went on to stay her mother was working with Meteor Systems to replace the inhabitants of Innovation Valley with robots. The team then departed to the mayor's office to see if Colbie's claims were true. 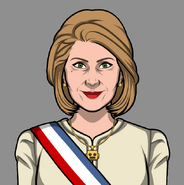 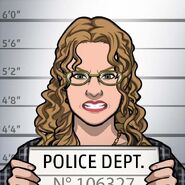 Retrieved from "https://criminalcasegame.fandom.com/wiki/Colbie_Arbor?oldid=514792"
Community content is available under CC-BY-SA unless otherwise noted.