Cody Mays was the killer of Deputy Sheriff Gus McGuff in Fields of Murder (Case #43 of The Conspiracy).

Cody is a 31-year-old corn farmer. He has short brown hair under a soot-stained straw cowboy hat. He wears a blue plaid buttoned-up shirt stained with soot. It is known that Cody rides horses, chews nicotine gum and reads The Almanac.

Right after Gloria and the player headed to the burning cornfield and found the victim's body. Coby appeared, telling them to get away from the field as it was not safe there. The team then flagged Cody as a suspect after he identifying the victim as Deputy Sheriff Gus McGuff and saying that the cornfield belonged to him. Answering about the murder and the victim, Cody said that he did not know why the victim's body was found in his own field as he was busy with the fire. In the end of the conversation, Cody told the team to go to Sheriff Roy Loukas' office to keep themselves safe from the fire.

Later, the team went back to Cody's cornfield and found the victim's tablet there, which (per Cathy) was used by Gus. Cathy told the team that the victim had accessed the national criminal records database and was interested in Cody's past conviction. She then explained that Cody had spent 18 months in prison for robbing a gas station in Pacific Bay ten years prior, and he had never re-offended since then. Gloria and the player decided to call Cody in for another interrogation. There, Cody complained that Gus was always digging his past, coming after him and accusing him of things that he did not do. Cody then said that it was all in the past and that he was a changed man. Nevertheless, he told the team that starting a new life after being released was not easy, especially in a place like Spring Fields.

However, after collecting enough evidence, the team found out that Cody was Gus' killer. Admitting to the murder, Cody said that someone had bribed him to set his cornfields on fire and to leave no witnesses. When he saw that Gus had seen him do the deed, he shot him in the chest point-blank with a DIY sawed-off shotgun. After he said that he did not know who had bribed him, Judge Powell sentenced him to 50 years in prison.

Later, Gloria and the player went to Cody's cell to find out more about the bribery. Answering about that, Cody explained that a mysterious guy in a suit had come to his farm, paid him to do the deed and then left, telling "Fornax" that the job was done, meaning that the person who wanted the corn to burn was "Fornax". The team then decided to go to the tractor barn to find more clues after Cody telling them that he left all the money they had given him there. 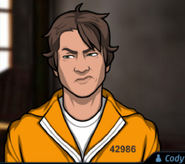 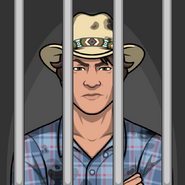 Cody, sentenced to 50 years in prison for the murder of Gus McGuff and arson. 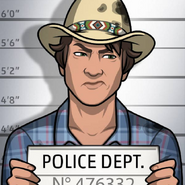 Retrieved from "https://criminalcasegame.fandom.com/wiki/Cody_Mays?oldid=467598"
Community content is available under CC-BY-SA unless otherwise noted.