Coco the Magnificent is a 48-year-old clown who works at Paradise Circus. He wears a multi-colored outfit, complete with hat and bow tie, and wears red and white face paint. It is known that Coco eats shaved ice and uses chalk.

Coco was first interrogated after Amy and the player found a message he sent to the victim on a balloon animal. When told about the victim's death, he was happy to hear of it. Amy was shocked to hear that he was happy that the victim is dead, then asked if he and the victim had a workplace conflict. Coco said that circus life was not easy as he was being laughed at by many people, including fellow artists.

Amy and the player spoke with the clown again when they found a message from the victim on a piggy bank, saying she will pay Coco back. When asked about the money, he said that he had been saving it for years hoping to go to drama school; though the victim mocked that saying he could not be an actor. Then one day, Annie disappeared with his money, only leaving behind the message on the piggy bank.

Although Coco was proven to be innocent after the team incarcerated Mikey Bolero, the team had to speak to him again regarding a possible big heist. According to Eugenia Hestentrope, he had been seen speaking to Louis De Rico on a rooftop. When confronted about this, he said that Louis is his cousin. When Louis came to talk to him, Coco threw a pie in his face saying he did not want anything to do with a thief. Amy and the player then left to search the rooftop, seeing if they could find anything Louis left behind. 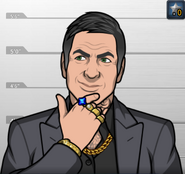 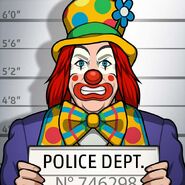 Retrieved from "https://criminalcasegame.fandom.com/wiki/Coco_the_Magnificent?oldid=413632"
Community content is available under CC-BY-SA unless otherwise noted.