Clifford Grady was the victim in Cloudy with a Chance of Murder (Case #19 of Pacific Bay).

Clifford was a weather forecaster for the Pacific Bay Weather Channel. He had short light brown hair and blue eyes. At the time of his death, he wore a brown shirt with a designed gray tie over it and a darker brown jacket with an unhappy face badge on the right, along with a JTS badge on the left and a blue pen inside the pocket. He also sported a headset on his right ear.

Amy and the player found Clifford with his throat slashed on a couch near a house destroyed by the hurricane. They sent his body to Roxie, who confirmed that Clifford was pushed into the couch before his carotid artery was sliced with a circular saw blade, whereupon he died of blood loss. Roxie then scanned the area of clothing where he was pushed and found traces of cat hair, meaning that the killer had a cat.

Later, the team found a bloody weed whacker in the courtyard of Clifford's apartment. They sent a sample of the blood to Yann, who confirmed that the blood was Clifford's and so the weed whacker was a murder weapon. Yann also found Cajun spices amalgamated with the blood, meaning that the killer ate Cajun food.

Because Hurricane Yves was manmade, Clifford had failed to report its predicted arrival in Jazz Town, leaving its residents unprepared and increasing the impact of the storm. This made many Jazz Town residents resent him for his apparent incompetence, one of which was stormchaser Peggy Pascal who had told him in vain to report it after she had predicted it. Another was his therapist, Madeleine Deville, who was frustrated that he did not feel guilty about it. Madeleine just hated him in general, so much so that she was prescribing high dosages of medication that could lead him to suicide. Another was Richie Lacroix, the JTS boss, who blamed him for the drop in ratings in his channel and was thus using his death as a way too boost ratings. Finally, there was his sister, Marie Bordeaux, who lost her daughter Colette to the storm. Additionally, she had entrusted him to take care of Colette when the storm hit the town. She then sent him an invitation to her funeral as a chance to apologize, but he refused to attend. Meanwhile, due to all the hate, Clifford's landlady Agatha Christmas had been receiving death threats as well. She also accused Clifford of killing one of her cats.

The killer turned out to be Marie.

After denying the accusations, Marie admitted to the murder. Marie could not take Clifford's lack of guilt for failing to protect Colette and for failing to predict the arrival of Hurricane Yves and so she slashed his throat with a weed whacker "like the weed he was". Judge Dante sentenced her to 10 years in jail, with chance of parole in 5 years. 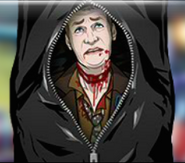 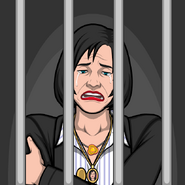 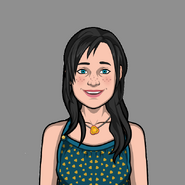 Retrieved from "https://criminalcasegame.fandom.com/wiki/Clifford_Grady?oldid=466729"
Community content is available under CC-BY-SA unless otherwise noted.