Cliff Montgomery was the killer of faded Ivywood star Celine Dernier in Light My Fire (Case #29 of The Conspiracy).

Cliff is an 87-year-old actor. He has balding gray hair, a beard and a mustache. He wears a cream suit jacket over a salmon waistcoat and a cravat with a turquoise fish scale pattern. Additionally, he houses a turquoise handkerchief in his left breast pocket. It is known that Cliff drinks absinthe, eats oysters and uses a salt scrub.

Cliff became a suspect after Gloria and the player found his portrait with the victim. The team then came and talked to Cliff about Celine. After being informed of Celine's death, Cliff was shocked and said that Celine was the most charming lady he had met. Cliff then also revealed that he and Celine were the ultimate acting duo during the heyday of his career, and he couldn't imagine who'd have wanted to harm Celine.

Cliff was spoken to again after the team (per Gabriel) found out that he had written a poem which was about Celine making him feel foolish and angry. After the team asked him about his angry poem, he revealed that Celine was ditching him as her co-star in favor of a younger actor. He also said that his wife also divorced him soon after and it was a dark time for him, but Celine didn't care about him when he begged her to reconsider their acting duo. Cliff then showed his remorse and hoped Celine forgive him for what he had done.

However, in the end, it was proven that Cliff was Celine's killer. Upon admitting to the murder, Cliff said that Celine had admitted to him that she spread rumors of him sleeping with every actress in Ivywood, which eventually led to his wife leaving him. Furious, Cliff threw absinthe at Celine and set her on fire with a torch. Judge Powell sentenced Cliff to 14 years in prison. 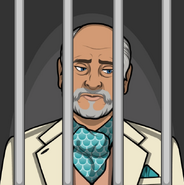 Cliff, sentenced to 14 years in prison for the murder of Celine Dernier. 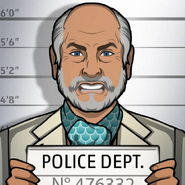 Retrieved from "https://criminalcasegame.fandom.com/wiki/Cliff_Montgomery?oldid=519742"
Community content is available under CC-BY-SA unless otherwise noted.