Clayton Rose was a suspect in the murder investigation of journalist Jude Connelly in Diamond in the Rough (Case #40 of World Edition).

Clayton is a 48-year-old mine foreman. He has short gray hair under a yellow construction hat, and is usually seen carrying around a walkie-talkie. He dons a greenish-brown-collared shirt under an orange construction vest with the De Brills Diamonds logo, along with diamond dust on his shoulders. It is known that Clayton holds expertise in mechanics, and consumes caterpillars and hoodia.

Clayton was first interrogated after Carmen and the player found his foreman's badge at the smugglers' lair. He simply said he was keeping an eye on the diamond smugglers. When informed of the murder, he was shocked since they had the highest safety standards. He feared it was Jude, and explained he agreed to do an interview regarding diamond smuggling and its effects on the mine, but he felt the victim was hiding something from him. He got word that Jude was at the smugglers' lair, but he could not find any proof of him being involved with the smuggling.

Clayton was spoken to again after the team stopped him from blowing up the crime scene. He simply said he was doing it so the miners would hit their quota, despite Carmen pointing out how suspicious it was. Since they ended up finding a diamond the size of an apple, De Brills had been laying pressure on them. Unfortunately, the victim tried to steal it and he needed to retrieve it by any means possible. When Carmen suggested he killed him to get the diamond back, Clayton said some of his men ambushed the victim at the Falls and managed to get the diamond back.

Clayton was found to be innocent after the team incarcerated Olivier Feraud for Jude's murder. But he was spoken to again about a large diamond found in an unattended metal briefcase, the same diamond Jude tried to steal. He said he was trying to keep it secure, but he did not want to make himself a target for the smugglers. Their security camera caught wind of a mysterious blonde person in a white rally racing jacket sneaking into his office, so he had to find another place for the diamond. Carmen was suspicious that he was trying to take the diamond for himself, but he said he would never do such a thing. He also said their best smuggling lead would more likely be the blonde person in the rally racing jacket instead of him. Believing the person to be Lily Karam, Carmen and the player decided to have a chat with her about why she was at the mines. 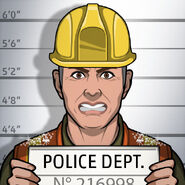 Retrieved from "https://criminalcasegame.fandom.com/wiki/Clayton_Rose?oldid=408145"
Community content is available under CC-BY-SA unless otherwise noted.