Clay is a 39-year-old cowboy. He has brown hair and wears a brown cowboy hat. He also dons a blue shirt underneath a leather vest, as well as a brown and red poncho over the vest. He is seen with a cigar in his mouth.

In his first appearance, it is known that Clay chews wheat, owns a collie and drinks milk.

In his second appearance, it is discovered that he drinks whiskey punch, likes Buffalo Bill, plays poker and smokes cigarettes.

Little Murder on the Prairie

Clay was spoken to again about a check that the victim signed out to him. He then told the player that he did weeks of work for Benjamin, but when it came for him to be paid, he asked for him to wait. After finally getting a check, Clay angrily revealed that the bank had rejected it, meaning he received no pay for his work. When Isaac implied that Clay could be the killer, he replied by saying it wasn't enough for him to snap.

Clay was found to be innocent after the team incarcerated Vinnie Costa for Benjamin's murder.

Clay became a suspect once again after the player and Maddie found his pistol in Providence Town's main street. He said he only just arrived in town looking for work, and was not even aware of the murder despite stopping by the saloon the victim was murdered in. But he did say he remembered Vinnie, he seemed more of a thug than a cowboy, and said those kinds of people usually come to a bad end around those parts of town.

Clay was spoken to again about a threat he wrote to the victim on a horseshoe. He explained that after Vinnie killed Benjamin Galls, he tried to escape using Clay's horse. Unfortunately, his horse could not jump over the fence and ended up breaking one of his legs in the process. He wanted Vinnie to pay for it, considering how it was thanks to him he was unable to get a horse riding job, so he did not feel sorry one bit for Vinnie's death.

This time around, it was proven that Clay was behind Vinnie's murder. Clay denied involvement but soon admitted to the crime. He believed that Vittorio Capecchi would bring progress to Coyote Gorge with the railway. When he found out that Vinnie would testify against him, he caused an explosion to lure Rose off his room, snuck inside with a stolen master key and sliced his throat with a broken bottle. Judge Lawson sentenced him to 25 years in jail. 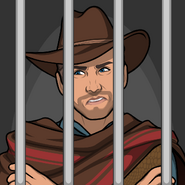 Clay, sentenced to 25 years in prison for the murder of Vinnie Costa and for the obstruction of justice. 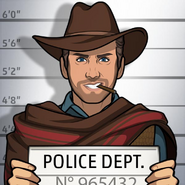 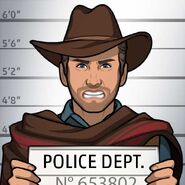 Retrieved from "https://criminalcasegame.fandom.com/wiki/Clay_Westwood?oldid=415383"
Community content is available under CC-BY-SA unless otherwise noted.