Claudio Aguirre was the killer of SOMBRA agent Zoila Huanca in Total Eclipse of the Heart (Case #46 of World Edition).

Claudio is a 45-year-old musicologist. He has short blond hair and scratches on the side of his face. He dons a multi-colored robe with a cochineal stain, and is usually accompanied by a monkey on his left shoulder. It is known that Claudio is right-handed, eats rocoto chilis, and speaks Quechua.

Claudio became a suspect after Jack and the player found his smartphone at El Rey's hacienda, which contained many photos of the victim. He was already aware of the murder and was saddened by it, and said he took the photos because he was in love with her. Since they were both staying at the hacienda, he made her a dinner of stuffed chilis, but she said they were too intense for her. He went on to say it broke his heart due to the fact that he would never see her again.

Claudio was interrogated again regarding a pan flute he sent to the victim, which contained monkey excrement on it. He said it was meant as a present since the dinner was a failure, but the monkey then left his excrement on it, which made him think that was why she turned him down. When Jack suggested he took revenge because she turned him down, he immediately denied it and was still saddened by her death.

It was all revealed to be an act, since Claudio was revealed to be Zoila's killer. Claudio tried denying involvement, but eventually admitted to killing her because she was in the way of staging a mutiny against SOMBRA. He exclaimed that he had formerly been a SOMBRA agent and that he was the "Wrath of God" who would take over the world by himself. Judge Adaku sentenced him to 50 years in prison. 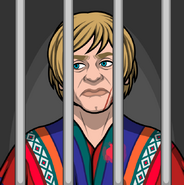 Claudio, sentenced to 50 years in prison for the murder of Zoila Huanca. 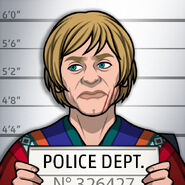 Retrieved from "https://criminalcasegame.fandom.com/wiki/Claudio_Aguirre?oldid=409180"
Community content is available under CC-BY-SA unless otherwise noted.