Claudia Pulchra was the killer of her mother, noblewoman Flavia Pulchra, in When in Rome (Case #3 of Travel in Time).

Claudia is a 17-year-old Vestal Virgin and the daughter of the victim with green eyes, brown hair tied into braids under a red infula and vittaes, a beauty spot under her left eye and another one on her right cheek. She is seen wearing a white stola with shoulder straps and red lining, along with a red belt. It is known that Claudia drinks Pompeian wine, uses body oil and reads Catullus.

Claudia became a suspect after Jack and the player found his bulla and identified her as the victim's daughter. Jack told her that her mother had been murdered, making her wonder who could have committed such a terrible act. She then told the team that she knew of no one who would wish Flavia harm.

In the end, it was proven that Claudia was Flavia's killer. Claudia had already hated her mother for forcing her to become a Vestal. During her confession, she admitted that Great Consul Octavian had sympathized with her and promised to marry her and break her free of her priestess life if she killed her mother. The team then took her to Octavian, who banished her from Rome, betraying her. 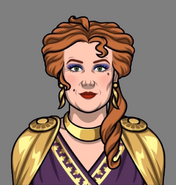 Retrieved from "https://criminalcasegame.fandom.com/wiki/Claudia_Pulchra?oldid=531184"
Community content is available under CC-BY-SA unless otherwise noted.