Claude Lamothe was the killer of thief Theo Mercier in Under the Thunderdome (Case #21 of Pacific Bay).

Claude is a 45-year-old pharmacist with brown eyes, shoulder-length brown hair and a pair of round glasses. He dons an orange shirt with a pinstripe orange tie. Above it, he wears a white lab coat with a pocket on the right side and his pharmaceutical company's logo on the left. The pocket consists of a fountain pen, while the logo is covered by a huge mud stain. In addition, he wears an evacuation badge around his neck. It is known that Claude drinks chicory and uses insect repellent.

Chief Marquez informed Amy and the player about a break-in involving stolen prescription medicine which posed a threat to public health. The player recognized Theo as the one who was spotted from the pharmacy's surveillance camera during his final hours alive in which Chief Marquez ordered the team to investigate the pharmacy for clues regarding Theo's final moments.

Amy and the player opted to interrogate Claude, the pharmacist, before looking in the pharmacy in which Amy told Claude that Theo was the one who broke in and stole prescription medicine. Claude told the team that Theo committed the theft numerous times before this case as since the theft involved prescription medicine, Claude sensed trouble but not without Amy informing Claude of Theo's death. Amy and the player thus proceeded to investigate the Town Square Pharmacy for relevant clues.

Claude was due for a second conversation after Hannah managed to confirm the faulty GPS to be the property of Claude. In addition, Hannah checked the GPS's trip history to suspect Claude made multiple trips to the Mercier residence as well--prompting Amy to smell trouble in the brink of Hannah's analysis. Claude apologized to Amy and the player for not telling them the story behind the theft, but Claude made visit after visit to the Merciers to convince Theo to return the prescription medicine back to Town Square Pharmacy, but to no avail. Claude would eventually be the one who committed the murder as the killer's attributes incriminated him as Theo's killer. Therefore Amy and the player went to Town Square Pharmacy to arrest the pharmacist, but not without Claude telling his motives to the team.

Claude was disgusted about Theo's constant thievery of his pharmacy and believed Theo's actions put lives in Jazz Town in jeopardy (given the regulations placed on prescription medicine) as Theo believed everyone should have access to quality medicine. The visit before Theo's death, Claude tried to reason with him, but to no avail, prompting Claude to commit the murder. Claude grabbed a weather vane that was broken during Hurricane Yves, followed Theo to the Jazz Town Thunderdome with a GPS, confronted the victim, and ended Theo's life by thrusting the weather vane into his throat. Afterwards, Claude placed Theo's body in a military crate and fled the crime scene before Colonel Spangler arrived. Claude tried desperately to convince Amy and the player that the murder was warranted to avert the unlawful use of controlled prescriptions, but Amy made clear that the law was the law and no one's allowed to take the law into their own hands.

The Honorable Dante told Claude in court that he could have no more free lollipops in the pharmacy, but going on-topic Judge Dante told Claude that murder does not fall into the best of the public good's interest but Claude told Judge Dante that he saved Jazz Town from an unlawful prescription distribution spree that would potentially become catastrophic. Judge Dante (mirroring what Amy told Claude) stated that vigilance with violence doesn't pay under any circumstances, and weighing both the brutality of the murder not to mention Claude's illicit vigilance were grounds for a 25-year jail sentence without parole for Claude. 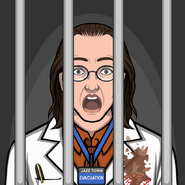 Claude, sentenced to 25 years in jail without parole for the murder of Theo Mercier. 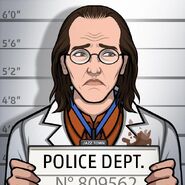 Retrieved from "https://criminalcasegame.fandom.com/wiki/Claude_Lamothe?oldid=501443"
Community content is available under CC-BY-SA unless otherwise noted.