Claire Cambridge was a suspect in the murder investigation of ski jumper Anjulie Cruz in Leap of Death (Case #25 of Pacific Bay).

Claire is a 32-year-old leisure skier of White Peaks with black hair and purple earmuffs. She also seems to have sunscreen on her cheeks. She wears a pink fur coat and a green scarf. Besides that, she dons a pink snowflake and a "SKI PASS" badge on her coat. It is known that Claire has a snow mobile, eats fondue and wears lip balm.

Claire was in trouble when Amy and the player found a ski jumping class flyer addressed to her for a tuition of $9000 USD. Claire admitted she requested information about Anjulie's ski jumping class since Claire wanted to learn how to ski jump given that the class would not be far from where she lived. Claire added that the tuition for the ski jumping class was steep to her sights but Amy was more interested in Anjulie's murder than Claire's rant. Claire ripped the postcard ad due to her inability to afford the tuition of the class albeit she told Amy she did not believe in homicide.

Claire had to deal with Amy and the player a second time after the player found a boycott flyer with her fingerprints matching the description of the prints found on the paper. Amy was confused as to why Claire was interested in Anjulie's ski jumping course while Claire intended to encourage the audience to boycott the Frosty Cup. Claire did not like the idea of Anjulie's celebrity profile dictating who can ski and who can not. Amy told Claire that Anjulie encouraged women to ski as a sport but Claire furiously replied that Anjulie was an ageist, in which Anjulie marketed her camp for people who wanted to become professional athletes. Claire did not like the idea of skill level discrimination in the skiing world as she felt it was unfair to the average leisure skier not to mention she wanted to demonstrate the emotional harm professional sports were doing to the average person.

Claire was innocent at the climax of the case after it was found that sexism was the triggering motive for the murder, but she was found guilty of harassing Sharon White after Amy and the player found Claire vandalizing Sharon's goggles. Claire did not want Sharon to ski in her mountains much to Amy's suspicion of Claire wearing the Night Walker mask, but was fined by Amy for damaging Sharon's property. 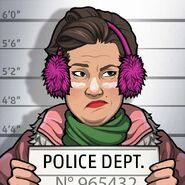 Retrieved from "https://criminalcasegame.fandom.com/wiki/Claire_Cambridge?oldid=413820"
Community content is available under CC-BY-SA unless otherwise noted.