Lebrun is a 42-year-old Paris judge and Hugo's ex-wife. She has blue eyes, dirty blonde hair tied back in a bun and a mole to the right of her nose. She wears a standard judge's robe with a white ruffled collar. She sports gold-rimmed half-moon spectacles and pink lipstick. She is occasionally seen holding a brown gavel in her right hand.

After arresting Sébastien Lefebvre's killer, Hugo told Carrie and the player that the woman he was divorcing was Judge Lebrun and that he had lost the divorce papers that he was supposed to fill out and deliver to her that day. After finding the papers and consulting with High Commissioner Delacroix, Hugo and the player gave the divorce papers to Judge Lebrun. She was pleasantly surprised that Hugo had gotten the papers together in time and told him that the divorce did not mean that they could not be friends. She then told Hugo that she would see him in court.

After arresting Jackson Peacock's killer, Enzo and the player went with Émile to meet his date under the online username "LawGirl21" at Oh La Vache café. To their shock, they found out that LawGirl21 was, in fact, Judge Lebrun, Hugo's ex-wife. With the revelation, the two then ended their relationships out of respect for Hugo. After Émile reported to Hugo about this, Hugo was saddened at the fact that Clémentine had moved on from him so soon.

The player may choose Judge Lebrun to join the investigation of each crime scene (in any case in City of Romance) and provide hint bonuses. She is available as a 5-hint partner. (This feature is only available in the mobile variant of Criminal Case) 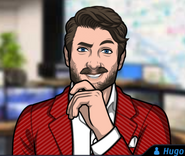 The player may choose Judge Lebrun to join the investigation of each crime scene (in any City of Romance case) and provide hint bonuses.
Add a photo to this gallery

Retrieved from "https://criminalcasegame.fandom.com/wiki/Clémentine_Lebrun?oldid=546956"
Community content is available under CC-BY-SA unless otherwise noted.