Cindy was a 19-year-old Grimsborough University freshman with long blonde hair and blue eyes. At the time of her death, she was seen wearing blue overalls over a white tank top. Furthermore, she also wore a silver flower necklace.

Cindy was found cut in two near the university's entrance steps by Gloria and the player. Martine had shown excitement about the murder as she confirmed the killer used a chainsaw to cut her in half according to the lacerations through her organs and muscles. Martine also confirmed that she found traces of ingredients for chili on the victim's torso. This confirmed the killer ate chili.

Later, the team found the murder weapon in a gardening box and sent it to Rita after they confirmed it was the same from the killer's footage. Rita confirmed that the chain surrounding the moving blade left a distinctive tearing pattern through the victim's torso. After Gloria questioned the clean blade, Rita confirmed that the weapon was cleaned and oiled with professional-grade products. This lead led them to interrogate the university's landscaper Gunnar Burns again about the weapon.

According to her teachers, Cindy was an excellent student. Cindy was the lead actress in fellow student Toby Hansen's slasher film, Butcher Lake, where she played the "final girl", the only student who would be alive by the movie's end. Toby found her a pain to work with, as she constantly ignored direction and changed lines on a whim. Cindy had bad blood with her co-star Sally Hooper, who she was trying to get rid of by spreading bad rumors. Cindy hit on Prof. Luke Harris a lot, although he kept rejecting her advances as dating a student was against his principles. Cindy's parents had accused Dean Donna Walker of taking their donations to the university for personal gain, which she took offense to.

The killer turned out to be Toby.

Upon admitting to the crime, Toby said that Cindy was transferring to another university and that he could not re-shoot the entire student film to replace her without causing major difficulties. He then thought that he might as well kill her, seeing that she was about to leave either way. He then told her to meet him on the campus, where he proceeded to film himself wearing the film killer's costume and slicing her in half with a chainsaw in order to depict the "most realistic death scene in all of horror cinema". Judge Powell sentenced him to 50 years in prison. 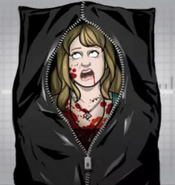 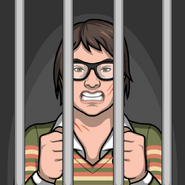 Toby Hansen, Cindy's killer.
Add a photo to this gallery

Retrieved from "https://criminalcasegame.fandom.com/wiki/Cindy_McMinn?oldid=491883"
Community content is available under CC-BY-SA unless otherwise noted.