Cindy Hamilton was the victim in Day of the Dead (Case #49 of World Edition).

Cindy was the project coordinator in the construction of the wall separating the US from Mexico. She had short, messy blonde hair, blue eyes, and hooped earrings. At the time of her death, she donned a purple polka-dotted dress with a name tag.

Cindy was found by the construction site hung up on a crane, covered in streamers and beaten to death. According to Grace, she had been knocked unconscious before being hoisted up. The bruises leading to her death had distinct markings, so she told them to look for a wooden bat or club with ornate carvings on it. She also found a clear liquid soaked into the rope used to tie Cindy up. The liquid was revealed to be tequila, which meant the killer drank tequila.

After investigating the storage facility underneath the construction site, Jack and the player found a wooden bat covered in blood. It was sent to Lars, and confirmed the blood was the victim's, filing it as the murder weapon. According to Dupont, the piñata bat was inlaid with Aztec carvings, which followed the fact that piñatas were a part of Mexican culture for centuries. If the killer had that bat, then they had to have knowledge of Aztec legends.

Cindy had caught her brother, Marvin Hamilton, smuggling Aztec artifacts across the border. Cindy had slept with supply manager Ramon Cortez but had told him beforehand to keep quiet so that she would not get in trouble with her superiors. Cindy personally endorsed contractor Chico Alegria to work on the wall before she called for American contractors so that the USA and not Mexico would benefit from the border wall construction. Cindy was unpopular with the Mexicans, with Madena Cuervo leading a peaceful protest against the wall despite Cindy's racist remarks towards the Mexicans. Cindy had also mocked the Day of the Dead traditions, leading to an argument between her and festival organizer Lupita Mendez.

The killer turned out to be Madena.

Madena tried denying involvement but admitted to the crime. As her daughter was American, Madena would be unable to see her daughter once the wall was completed. When she tried to convince Cindy to stop the construction, Cindy laughed at her and called her daughter a "half-breed". Angered by the remark, Madena tied Cindy to a hook and relentlessly beat her to death with a piñata bat. Judge Adaku sentenced her to 30 years in jail. 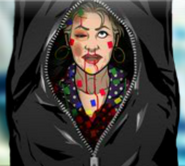 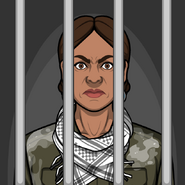 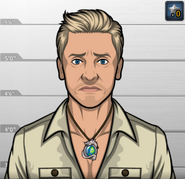 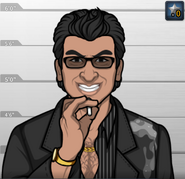 Ramon Cortez, Cindy's boyfriend.
Add a photo to this gallery

Retrieved from "https://criminalcasegame.fandom.com/wiki/Cindy_Hamilton?oldid=457467"
Community content is available under CC-BY-SA unless otherwise noted.