Christy Mathis was the killer of her ex-fiancé, military attaché Adam Hassan, in Murder by Proxy (Case #7 of World Edition).

Christy is the 22-year-old ex-fiancée of the victim and a foreign student from the United States. She has long blonde hair and has a blue scarf wrapped around her head. She dons a pink jacket over a white shirt and a necklace around her neck. It is known that Christy eats saffron, knows ancient Arabic, drinks mint tea and suffers from hemophilia. It is also revealed in this very case that she is one of the students of Professor Omar Bahir.

Christy was first interrogated after Jack and the player identified her on a picture with the victim. She was saddened at hearing the victim's death, and said they dated for a while but broke up. She felt she needed to concentrate on her studies as that was the reason why she was in Morocco in the first place. When Jack asked if they met up after that, she did say they would meet up at the souk, but it became awkward when they tried to talk to each other.

Jack and the player had to talk with Christy again after finding a ring engraved to her in a tagine dish at the souk. She did not bring it up because she did not think it was such a big deal, but Jack brought up how it was found in a tagine dish. Christy said that she and Adam were having a fight in the souk, so she took off the ring and threw it. When Jack asked what they were fighting about, Christy said she found out that Adam slept with other women, and it broke her heart.

In the end, the evidence pointed to Christy as the one who killed Adam. At first, Christy had denied killing Adam, but then, she confessed to committing his murder when Jack told her she was a main suspect in Chief Ripley's murder. Christy said the reason she killed the victim was because Adam had gotten drunk one day, raped her, then left as if nothing happened. She then killed him to ensure it would never happen to other students. She told Judge Adaku in court that he could have gotten away with more due to his diplomatic immunity. The judge sentenced her to 10 years in prison.

With Adam’s murder solved, Ingrid told the team to focus on Ripley’s murder. The administrative assistant ordered Jack and the player to interrogate Christy in order to figure out how she got the idea for using the dart. Christy explained that the dart and the pipe had just appeared inside her bag as she came home from a class one afternoon. She claimed that she had never put the darts in the bag and thought that someone else had dropped them in the bag while she was shopping at the souk. Christy further explained to Jack that there was a note inside the bag, saying “What kills a chief, kills an ex, and no one will be the wiser.” However, the student threw the note out. Jack and the player were prompted to investigate the souk again to find a ripped package of the poisoned darts, the same darts used to kill Adam and Ripley. 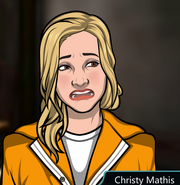 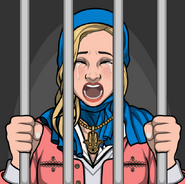 Christy, sentenced to 10 years in jail for the murder of Adam Hassan. 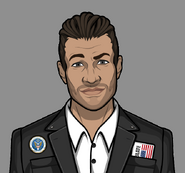 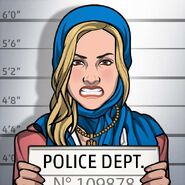 Retrieved from "https://criminalcasegame.fandom.com/wiki/Christy_Mathis?oldid=474199"
Community content is available under CC-BY-SA unless otherwise noted.